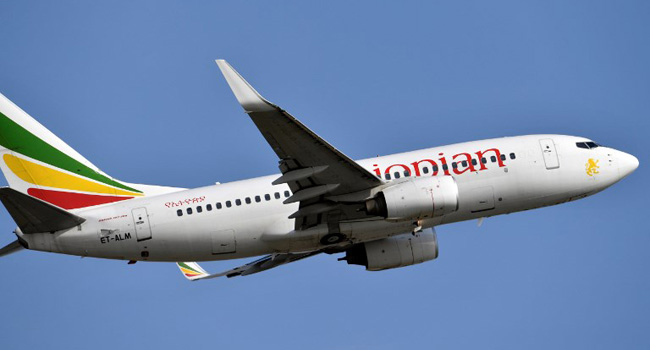 As more questions emerge over the safety of the Boeing 737 Max 8 plane after Sunday’s crash, China and Ethiopian Airlines have grounded the fleet.

Ethiopian Airlines said Monday it had grounded its fleet after a crash that killed 149 passengers and eight crew.

“Following the tragic accident of ET 302… Ethiopian Airlines has decided to ground all B-737-8 MAX fleet effective yesterday, March 10, until further notice,” the state-owned carrier said in a statement released on Twitter.

“Although we don’t yet know the cause of the accident, we have to decide to ground the particular fleet as an extra safety precaution,” said the airline, Africa’s largest.

All 157 people on board died when Nairobi-bound Flight ET 302 came down just six minutes after taking off from Addis Ababa.

It ploughed into a field near Tulu Fara village outside the town of Bishoftu, some 60 kilometres (40 miles) southeast of the Ethiopian capital.

Noting the “similarities” between Sunday’s crash and that of Indonesia, China’s Civil Aviation Administration said domestic airlines had until 6:00 pm local time (1000 GMT) to ground all 737 MAX 8 aircraft.

The Indonesia Lion Air flight had crashed after takeoff from Jakarta in October, killing all 189 people on board.

Operation of the model will only resume after “confirming the relevant measures to effectively ensure flight safety”, the administration said in a statement.

The aviation authority will contact the US Federal Aviation Administration and Boeing, it said.

China is an important market for the US aircraft company, accounting for about one-fifth of worldwide deliveries of Boeing 737 MAX models.

The company has delivered 76 Boeing 737 MAX aircraft to Chinese airlines, which have ordered another 104, according to data from the aircraft maker’s website updated through January.

Boeing and joint venture partner Commercial Aircraft Corporation of China operate a plant in the eastern city of Zhoushan that completes the interiors of 737 MAX planes for Chinese airlines.

The factory delivered its first MAX 8 plane to Air China in December. The planes are assembled in Renton, Washington state, and taken to Zhoushan to finish the interior work, according to Boeing.

Four of the Chinese victims are employees of Chinese companies, two work for the United Nations and two were people from Liaoning and Zhejiang provinces on personal trips, Lu said.

“China hopes Ethiopia will find the cause as soon as possible, keep China posted, and properly handle the follow-up work,” Lu added.