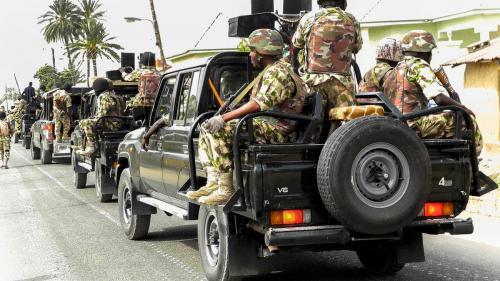 A Human Right Group under the auspices of Campaign Against Violent Election, CAVE, has condemned the activities of the military and other security agencies for their shameful roles before, during and after the General Election held across Nigeria on the 23rd of February and 9th of March, 2019.

Addressing the Journalist in Abuja, the National Secretary of the group Mr. Ochiagha Jude Olisa described the just concluded elections where governorship elections in some states were declared inconclusive as a charade which must be discredited by all lovers of constitutional democracy and respect for human rights.

He stressed that the upcoming rerun elections should not be militarized, to enable voters to exercise their franchise.

According to Mr. Olisa, a situation where Nigerian soldiers or rather, people in their uniforms contemptuously intimidated, harassed, molested and in some places shot at innocent voters cannot be said to be free and fair.

“We condemn in its entirety the militarization of the electoral process, particularly in the Niger Delta region of the country.

“As a Nigerian and human rights crusader, as an organisation that is preaching the respect for human sanctity, we are pained with the situation, were people are being shot just because of elections, this is not acceptable and we will be submitting our report to the United Nations, the International Criminal Court at the Hague to make sure those who contributed to this ugly development are punished,’’ he said.

Mr. Jude Olisa equally raised the alarm over some Nigerian activists who are placed under watch by Nigerian security operatives

He also said that the group, through its contacts in high places uncovered the leaked secret list. He challenged security agencies to come up with counterclaims on the list.

He said they were placed on watch list for allegedly opposing government policies.

“Our usually very reliable source informed us of a perfected plot by the federal government, through its security agencies clamp down on some activists and opposition voices all in the name of making hate speeches or wake news and some of them already being arrested through some funny allegations.

“The names include, well-known activists Deji Adeyanju, Social Media Influencers Babasola Kuti. Others are, SA to Gov. Wike on Social Media Oraye St. Franklin, Online News Publisher Darlington Okpebholo Ray, Adebayo Raphael, Ojehomon Omololu, Austin Usman Okai, Ambrose Ehichioya Ojeabulu, Daniel Osa-Ogbegie, Ariyo-Dare Atoye, these are some of the names our sources told us that are being watched for their antagonistic stands against the ruling All Progressives Congress (APC) led federal government and its policies,’’ he said.

Mr. Olisa explained that in a democratic dispensation everyone should have a right and such right should be respected and not be infringed upon in line with the nation’s constitution.

‘’As a group, we will move against any attempt to deny citizens freedom of speech and expression,” he added.