Herdsmen Killing: We Can’t afford A Nation That Grief Every Day, Catholic Tells Buhari
…As 2 Priest 17 others burried in Benue amidst tears
Joel Ajayi Abuja
Thousands of Christian faithful, especially Catholic in the Federal capital Territory on Tuesday Morning joined 57 cities across the country in a peaceful protest over endless killing of Christian faithful in the country.
The protest which holds at Christian Ecumenical Center in Abuja saw the Catholic members in their numbers with placards of different inscriptions; such as “Stop killing us we are not cow” “blood flowing like a river” “our hearts are bleeding” “life is scared” “terrorism has no tribe” “the killer must be arrested” “we are marching for our life” “government must stop sleeping” amongst other.
It was an emotional day for the Church that known for its perceived conservative disposition unlike other churches for the first embarked on a protest as the Church always takes the dialogue approach to any issues bordering her.
The members were visibly unhappy especially, when the picture of Rev. Fathers Joseph Gor and Felix Tyolaha and 17 Parishioners killed recently by armed Fulani herdsmen in Benue state that was buried today in Markudi was display, many could not hold it, as many wept uncontrollable.
Speaking at the Holy Mass Service held in solidarity with the Catholic Diocese of Makurdi, in Abuja, the Auxiliary Bishop of Abuja Most Revered Anselem Umorere, accused of Nigeria government of playing politics with the life of the citizen saying that life is scared and no one has right to take life.
“We are here today, because of the barbaric killing of human beings in Nigeria, and erosion of the perception of life as sacred and in union with the Diocese of Makurdi, we want to express our deepest displeasure over the ugly happenings in our country and pray for the nation.
“Government must wake up to stop those terrorist who take life of Nigerian especially the Christian faithful, nobody has brought to the book so far, despite the President Muhamadu Buhari campaign promises when he assumed office in 2015 where he pledged to protect the life of every Nigerian.” He said.
In his comment, the Former Director General of National Orientation Agency NOA, Mr Mike Omeri OFR, called on government to fix out the culprits saying Nigerian is tired of weeping every day.
According to him, Government must look for a strategies to combat issue that will involves every Nigerian, time has come that government should reach out to the government of Mali and Libya that they have named as culprits, so that we find lasting solution to the non-stop killing in the country
“let the government lead the way, it is not enough to have excuses and as far as I am concern the government is not aware of the criminal here because they are been giving us three or four names, it’s enough, we are been losing citizens, productive citizen in their prime, citizen who can contribute to the growth and development of economy in the country and we cannot afford a nation that grief every day.” He appealed.
On his own, the Director of Communication Catholic Dioses Abuja Father Patrick Tor Alumuku, expressed that every day’s killing is unacceptable, unjustifiable and it doesn’t lead to good governance, urging government to find a lasting solution to the killing that have eroded the peace of this nation.
He said; “We intent to send a strong message to the nation and that message is that life is important and without life there would be no nation, the apparent ignorance of on the part of government who has failed to accept the many death that we have experienced in this nation, its completely unacceptable, its unjustifiable and it doesn’t lead to good governance.
“And therefore, we want to say to this government that as everybody is saying enough is enough, we cannot go on this way. We are calling for peace in Nigeria because without peace there would be no development, there would be no progress and there will be no future so, we are praying for peace. We know and believe that with this march, peace will reign in Nigeria.
“We are demanding that killing must stop; we want a stop to the killing.” He appealed.
Howver, the series of attack had been carried out by so called Herdsman, the first was on January 11, for more than 80 persons killed by herdsmen on New Year Day. The second mass burial was scheduled for March 9, for another 24 Benue citizens killed by herdsmen. It was later called off after President Buhari announced he would be visiting the State, but a quiet funeral ceremony was held for the victims

INEC to review MoU with NYSC

Report Of DOHA Poor Performance: We Will Not Spare Culprits-Sports Minister 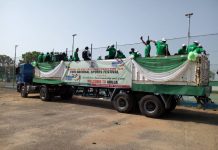 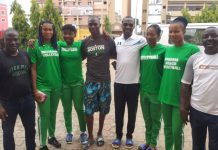