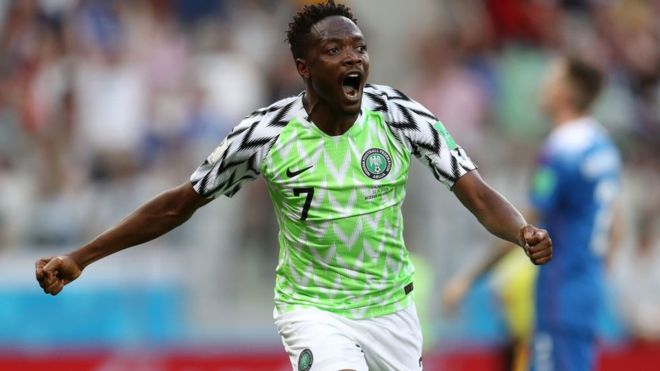 Super Eagles’ stand-in captain Ahmed Musa and Super Falcons’ opposite number Onome Ebi took the big gongs at the second edition of the AITEO-NFF Football Awards that held in Lagos on Monday night.

The project started only last year, but as happened during the first edition, dignitaries and guests came from all over Africa and other parts of the world, and the class and delivery of the event is fast high setting standards for other Awards, national and continental, to match.

It was also, the special night of recognition to the Super Eagles’ Class of 1994 – the squad widely nicknamed ‘Golden Generation’ after qualifying Nigeria for her first –ever FIFA World Cup finals, winning the Africa Cup of Nations on away soil for the first time and coming within 100 seconds of a quarter final place at the World Cup in the United States of America.

Emmanuel Amuneke, Michael Emenalo, Emeka Ezeugo, Efan Ekoku, Isaac Semitoje and Chidi Nwanu could not make it down to Nigeria for the ceremony. While a couple of the players present on Monday night did not make the final cut for the World Cup in America, six members of the group went ahead to join the Dream Team and return to America to conquer – by winning Africa’s men’s football gold at the Centennial Olympics in Atlanta two years later.

While FIFA Secretary –General , Ms Fatma Samoura (the first African/first woman to occupy the position) was honoured with the NFF Order of Merit Award, as Presidents of 18 Member Associations of FIFA, the Abia State Governor (Chief Okezie Ikpeazu), the Acting Governor of Edo State (Comrade Philip Shaibu) and captains of industry, political juggernauts, A-class artistes and heavyweight stakeholders of the game watched at the Eko Hotel and Suites, Victoria Island, Lagos.

President of the Nigeria Football Federation and First Vice President of CAF, Amaju Melvin Pinnick, once more eulogized the present administration of President Muhammadu Buhari (GCFR) for providing the conducive environment for football to thrive and for total support for the NFF and the various National Teams, while calling on Nigeria’s other billionaires and well –heeled companies to emulate AITEO Group and boost the development of football in Nigeria.

Business mogul and politician, Chief M. K. O. Abiola was honoured with the NFF Presidential Award, while Governor Akinwunmi Ambode of Lagos received the Lifetime Achievement Award for his hefty support for football projects and programs of the National Teams.

NFF First Vice President and Chairman of the Awards organizing committee, Barrister Seyi Akinwunmi said the Federation decided it was apt to honour the Super Eagles’ Class of 1994, 25 years to their AFCON –winning exploits and FIFA World Cup performance. It would be recalled that Nigeria was named the second most entertaining team of USA 1994 World Cup.

Responding on behalf of the 1994 Eagles, defender Austin Eguavoen expressed deep appreciation of the squad to the NFF for the honour, while also using the opportunity to plead that NFF should help the players pursue the Federal Government’s promise of a house for each member of the squad, following the AFCON triumph in Tunisia 25 years ago.

Goal of the Year: Ahmed Musa

Team of the Season: Super Falcons