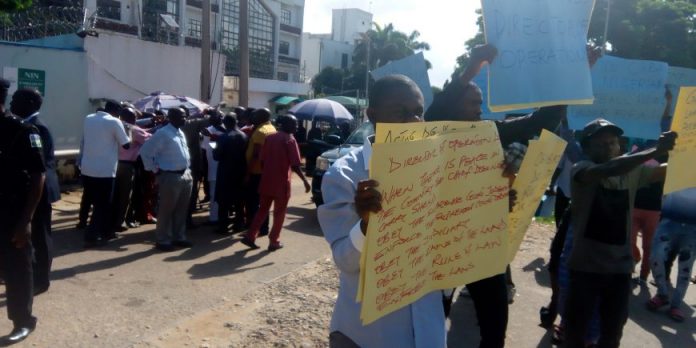 …Want DSS out in the next 24 hours

A peaceful protest aimed at seeing the end to laying siege of the Department of State Security at the Nigeria Football Federation headquarters in Abuja was demonstrated in front of the building around 9:45 am.

The group in their numbers stormed Glasshouse in Zone 7 with different inscriptions like; No to Impunity, No to DSS Occupation of NFF, We want DSS out of Glasshouse, Obey Supreme court Order, Enough of intimidation, Nigeria where FIFA statute is greater than the law of the land amongst other.

While speaking to the newsmen, the President, NANF, Harrison Jalla who led the protest called for urgent action over the unlawful invasion of the NFF that is threatening the peace of the federation.

Jalla accused the DSS of acting in contrary to Supreme Court verdict-urging that the decision of the judiciary must be respected.

“We want the Directorate of DSS to enforce the Supreme Court rulings and vacate this premises. We are deploying this measure as the first step by the time we come back here the second we will confront them.

“If urgent action is not taken, we are coming back tomorrow to continue the protest.” He Assured.

Also speaking during the protest, former second vice chairman, Chief Rumson Baribote said that the DSS occupant of the NFF headquarters is unconstitutional as nobody has the right to set aside Supreme Court orders.

“There is no constitutional provision that when the Supreme Court has ruled anyone has a right to set it aside. I have never seen a situation where a court of competent jurisdiction gave an order and the DSS that suppose to uphold and enforce such ruling are doing the contrary. We appealed to the security agencies to respect the laws that give them the legality to operate.” Pictures For the forthcoming 9th Editions of TIG INTERNATIONAL GYMNASTICS CLUB Tagged “Her...

(Part 2) How To Become A Complete Christian-Pst. S.O David