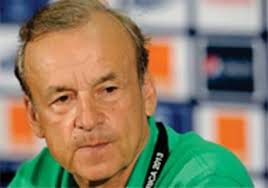 After Nigeria’s unimpressive feature at the just concluded U20 African Cup of Nations, Super Eagles Head Coach, Gernot Rohr disclosed that said he has made a list of players that could make the national team for the Africa Cup of Nations (AFCON) tournament in Egypt in June this year.

Rohr, who was in the Niger Republic monitoring the players, stated that the players on his list could be part of the AFCON qualifiers against Seychelles and the international friendly against Egypt next month.

“I saw some very talented players. One of them will be invited to the next Super Eagles camp”, said  Rohr.

“Others could be invited to the U23 qualifiers against Libya at the end of March by Coach Imama (Amapakabo)”,

Nigeria’s senior men’s national team, the Super Eagles, already qualified for the tournament and Rohr is looking to try out fresh legs in the last group E qualifier against Seychelles next month TraderMoni Set For Launch In Enugu

Government Partnership will make a difference