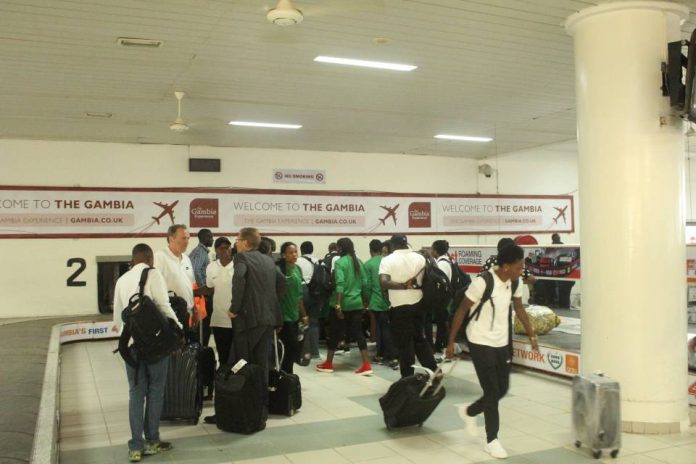 Super Falcons’ delegation lands in Banjul ahead of Wednesday clash

The delegation of Senior Women National Team of Nigeria, Super Falcons, has arrived in Banjul, capital of The Gambia, on Monday, ahead of Wednesday’s 2018 Women Africa Cup of Nations qualifier against Gambia’s Senior Women Team.

An Air Peace airline flight conveying the team from Lagos landed in Banjul at just after 11am Gambia time (12 noon Nigeria time). The contingent, led by the Chairman of NFF Women’s Football Committee, Hon. Ayo Omidiran, has since settled down at the Metzy Residence Hotel and the team had a first training at the FIFA Goal Project in Banjul on Monday evening.

Wednesday’s match will take place at the Independence Stadium in Bakau.

Gambia’s senior girls edged Burkina Faso in the earlier round, with the Super Falcons (eight-time champions) drawing bye, and the reward for the Gambians is a two-legged affair with the reigning champions that will determine which of the two teams will be at the final tournament in Ghana later in the year.