World Cup Preps: Iwobi, Onazi, Five Others Hit Super Eagles Camp in Uyo
Joel Ajayi Abuja
Super Eagles Vice-Captain Ogenyi Onazi, Arsenal striker, Alex Iwobi, Ola Aina four others were the early bird at the Super Eagles camp in Uyo, Akwa Ibom state where the team have their First Training Session on Monday ahead of red devil of DR Congo encounter come next week Monday
The players hit the Ibom Meridian Hotel Camp thereby bringing to seven the number of players in Camp as full invited player are expected today’s Tuesday
Other players includes, eagles goalkeeper, Ikechukwu Ezenwa, Bursaspor of Turkey defender William Troost-Ekong, Echijiele, and Kano Pillar Junior Lokosa.
Meanwhile, the Super Eagles will have their first feel of the Godswill Akpabio International Stadium turf at 5pm after they would have been boosted by the arrival of other players expected in camp.
In a chat with Aljazirah sports Nigeria on Tuesday Morning, the Super Eagles Coordinator Patrick Pascal, revealed that, Coach Gernot Rohr and other members of the technical crew are already present in Uyo and ready to get on with the team’s training programme.
The Super Eagles are expected to trade tackles with the Leopards of Congo DR next Monday in Port Harcourt before proceeding to London where they will play the Three Lions of England at the Wembley Stadium on 2 June. 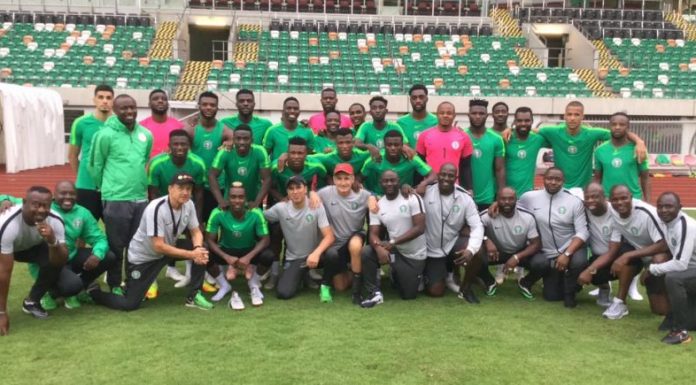 ICC Highlights Benefits of 360 Review of Tour To Nigeria