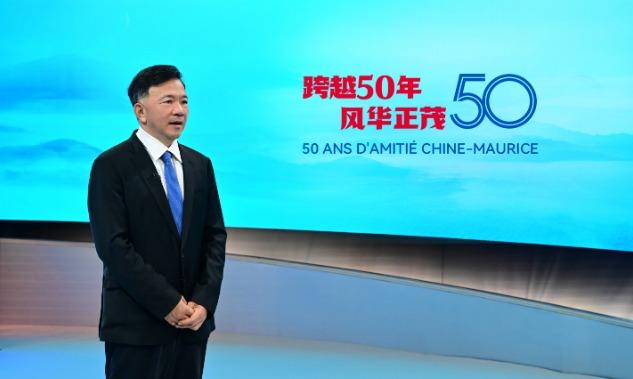 An online media event titled “China-Mauritius, Across 50 Years,” co-hosted by CGTN and the Mauritius Broadcasting Corporation (MBC), was held on Friday to mark the 50th anniversary of diplomatic relations between the two countries.

Under the theme of “Dialogue, Cooperation and Development,” the event was designed to build a platform to promote the comprehensive media cooperation between the countries and further develop mutual friendship.

Shen noted that China and Mauritius both embrace the tradition of multiculturalism, and said Chinese people look forward to learning more about Mauritius.

The world is undergoing unprecedented changes, Shen said, adding that the media of both countries should continue to promote exchanges and mutual learning, and enhance mutual understanding and trust.

For his part, Ganoo expressed hope that the two sides continue to deepen cooperation under the framework of the “Forum on China-Africa Cooperation” and strive to build a more prosperous, healthier and more stable world.

CGTN French and MBC also jointly held a launching ceremony to announce the broadcast of a series of high-quality programs in the forthcoming days. A total of 10 programs produced by CMG will be broadcast on MBC to bring a cultural audio-visual feast to the local viewers.

Over the years, CGTN French has deepened its cooperation with MBC. The program “Dialogue with the World: China-Mauritius Economic, Trade and Cultural Forum,” jointly produced by the two sides, has attracted wide attention among Chinese and Mauritius viewers

Chinese lenders have become more cautious in financing infrastructure projects on the continent, concerned about borrowers’ ability to repay loans

The Nairobi expressway was commissioned to the public on a trial basis on Saturday, and motorists will be allowed to use it for the next three weeks before its official launch.

So far 11,000 vehicles have registered to use the road. Kenyans have expressed their joy over the reduced traffic time they’ll spend when using the 27 kilometre highway.

As a Chinese-built and financed tollway opens in Kenyan capital Nairobi, its most remarkable feature may be that it is an example of Beijing’s attempt to retool the financing behind its Belt and Road Initiative in Africa.
The China Road and Bridge Corporation (CRBC) built the 27.1km (16.8 miles) Nairobi Expressway linking the country’s main airport and the capital. The US$668 million projectwas financed by the state-owned China Communications Construction Company, CRBC’s parent company.

A CRBC subsidiary, Moja Expressway, will operate the road for 27 years to recoup the investment through toll fees.
In all, the road marks a gradual shift in the belt and road strategy, from public debt finance to a new method of funding for infrastructure like roads and power plants in Africa: public-private partnerships (PPP).

Under the PPP model, Chinese private companies can lower the risks to repayment and help African governments reduce their loans and budget deficits, observers say.