The Minister of Information and Culture, Alhaji Lai Mohammed, has
called for the implementation of the various MoUs between Nigeria and
Namibia, especially in the areas of culture and tourism, to ensure
that they translate into economic benefits for the two countries.

The Minister made the call in Abuja on Thursday when he received the
Namibian High Commissioner to Nigeria, Mr. Humphrey Geiseb, on a
courtesy visit.

He observed that the bilateral cooperation between the two nations,
which dates back to 1992 on the platform of the 1st Nigeria-Namibia
Joint Commission, expired without implementation, and expressed the
hope that the MoUs will be revived for implementation this time
around.

“Unfortunately, the MOU, which had a lifespan of five years, has
expired and, until then, nothing was done by our two countries. I am
aware that efforts are on to renew the MoU for another five years.
Hopefully, this time, we will act to implement the MoU,” Alhaji
Mohammed said.

He promised to encourage a working relationship between Nollywood and
the Namibian Film Industry, against the background of the interest
expressed by a talented Namibian actress to feature in Nollywood
movies as a way of further honing her professional skills.

The Minister, who welcomed the support offered by Namibia to help
improve Elephant conservation in Nigeria,
stressed that with global warming and poaching, African wildlife is in
danger of extinction.

He thanked the Namibian Government for supporting Nigeria with 279
wildlife animals in line with the signed MoU on Cooperation in the
area of wildlife with the Government of Bauchi State.

“The animals, which comprised of 10 Giraffes, 53 Burchell’s Zebras, 14
Elands, 23 Blue Wildebeests, 21 Red Hartebeests, 24 Oryx, 26 Kudus, 52Springboks and 56 Common Impalas, were placed at the Sumu Wildlife
Sanctuary, which is located in Ganjuwa Local Government Area of Bauchi
State. We remain grateful to the Government and people of Namibia for
this,” Alhaji Mohammed said.

In his remarks, the High Commissioner went down memory lane to recount
the support which Namibia received from Nigeria in its struggle for
independence, and said the Namibia-Nigeria Joint Commission, which
last met in 2010, will meet next month to consider all the various
areas of cooperation between the two countries.

He listed additional areas of cooperation to include creative
industries, beef infrastructure, animal conservation, tourism and oil
and gas sector. 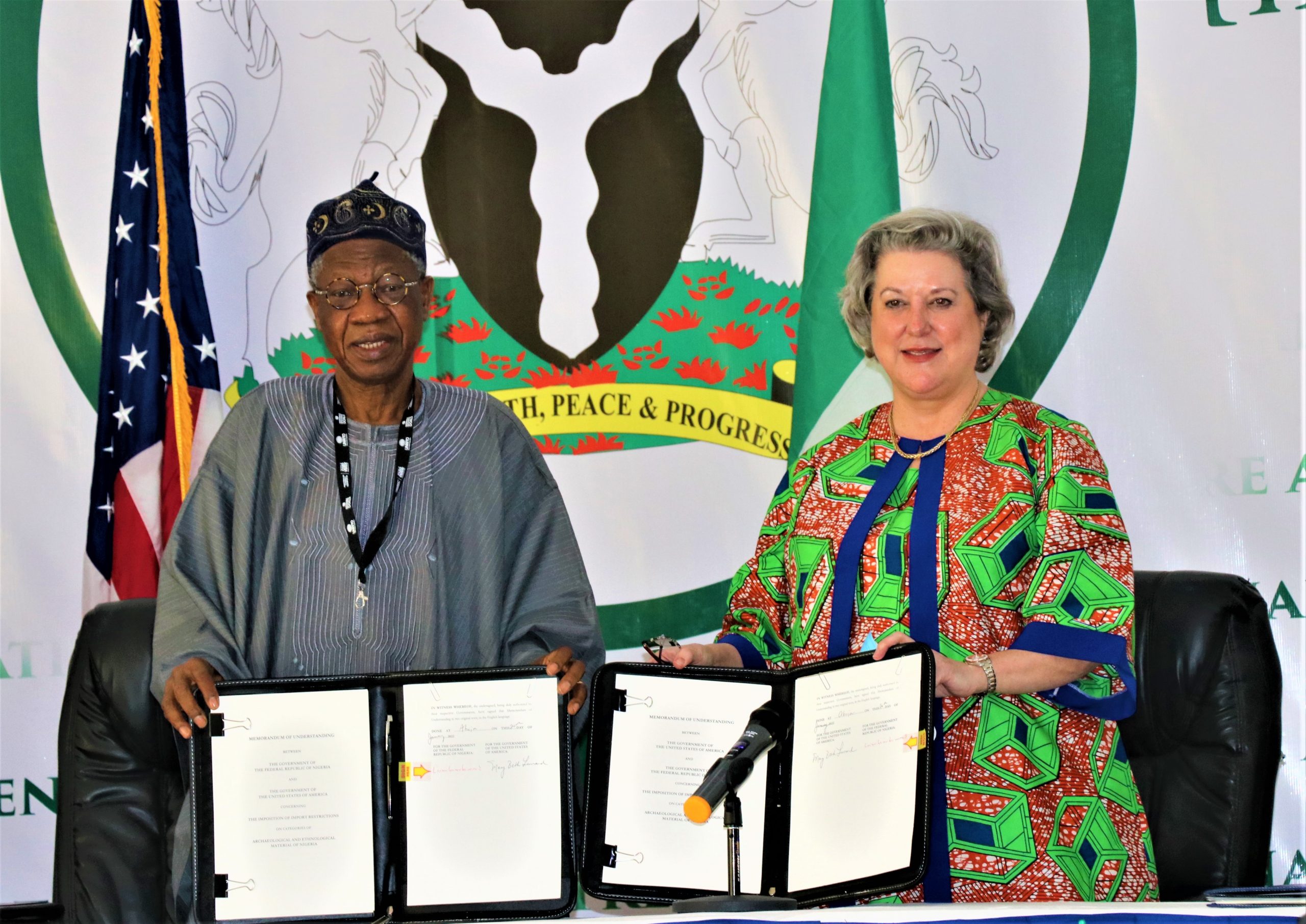 The Minister of Information and Culture, Alhaji Lai Mohammed, has expressed the optimism that the Cultural Property Implementation Act (CPIA) Agreement, which was signed by Nigeria and the United States of America on Thursday, will reduce the pillage of Nigeria’s ancient arts.

The Minister expressed the optimism when he signed a Memorandum of Understanding on the CPIA with the US Ambassador to Nigeria, Mary Beth Leonard, in the presence of the Minister of Foreign Affairs, Mr. Geoffrey Onyeama, in Abuja.

According to him, this legislation was enacted by the United States to restrict the importation into the US of archeological materials ranging in date from 1500 B.C. to A.D. 1770 as well as ethnological materials including those associated with royal activity, religious activity, etc. from nations that have entered into the kind of bilateral initiative that we are signing here with the United States today.

Alhaji Mohammed said on the basis of the agreement, Nigerian antiquities being imported into the United States without the requisite Export Permit will be seized at the border of the United States and returned to Nigeria without the arduous and costly task of going through the labyrinth of judicial and diplomatic processes.

“We are optimistic that this agreement will reduce the pillage of our irreplaceable archeological and ethnological materials, as the market for these materials is being shut in the United States against illicit traffickers.

“The agreement will last for an initial period of five years. If it works well, as we anticipate it will, it shall be renewed for a longer term. We implore other friendly nations to take a cue from the United States of America and join us in finding means to prevent the illegal importation of our antiquities into their countries,” he said.

The Minister said the signing of the MoU became necessary because, despite all efforts by the Ministry of Information and Culture and the National Commission for Museums and Monuments, with the assistance of law enforcement agencies, to prevent illicit export of the nation’s archeological and ethnological materials, widespread looting and illicit excavation of these materials still continue.

He said the stolen artifacts are mostly smuggled to Europe, the United States of America and other places for the benefit of art collectors.

The Minister, who thanked the Government of the United States, in particular the Embassy of the United States in Nigeria, for making the MoU possible, said the Nigerian Government looks forward to a diligent implementation of the landmark agreement, so it can become a game changer in the nation’s efforts to prevent the looting of its priceless ancient works of art.

In her remarks, the US Ambassador to Nigeria, Beth Leonard, said the agreement is aimed at preserving, restoring and protecting Nigeria’s cultural heritage.

“In Nigeria, over the past decade, the U.S Mission has partnered with the Nigerian government and state institutions to preserve cultural landmarks and sites through projects worth over one million dollars and funded by the U.S. Ambassador’s Fund for Cultural Preservation.

“Just last November, I signed a grant award to digitally survey the Busanyin Shrine located within the Osun Osogbo Sacred Grove. That $125,000 grant will help document a series of shrines within the Grove and provide training to local professionals in digital tools and cultural heritage management,” she said.