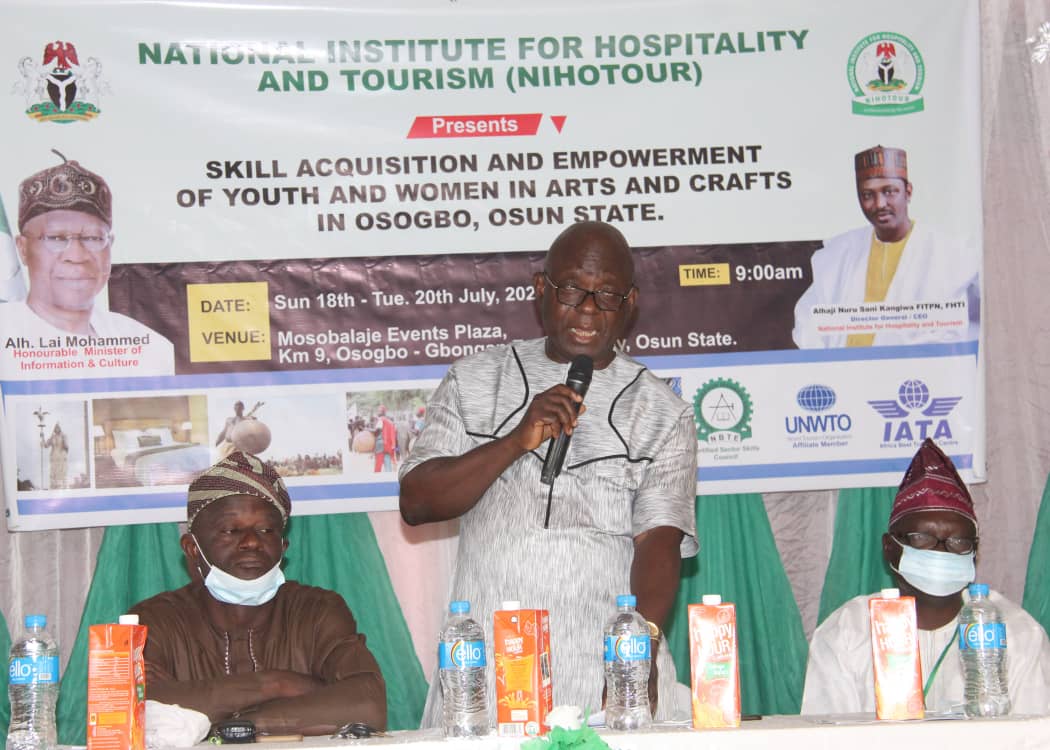 Youth empowerment for job creation, poverty alleviation, fight against hunger and technological breakthrough for Nigeria, key to NIHOTOUR’s training activities nationwide were the words of Alhaji Nura Sani Kangiwa, Director General of the National Institute for Hospitality and Tourism (NIHOTOUR) at the Skills Acquisition and Empowerment of Youths and Women in Arts and Crafts at the Oshogbo Campus of the Institute.

Kangiwa who spoke through Dr. Taiwo Famogbiyele, Director Research and Development and General Studies of the Institute at the occasion said what Nigerian youths need now more than anything is skill acquisition that will make them not only employable, but self-employed and self-reliant, noting that it is also the sure way to curb unemployment, achieve innovative creation and eradicate extreme poverty in line with the Sustainable Development Goals Agenda of the United Nations.

He said the objective of the Oshogbo Campus training is to empower participants with the necessary vocational and entrepreneurial skills in Nigerian Arts and Crafts towards creating economic stability and national security, urging the trainees to see themselves as very lucky and fortunate individuals chosen for the training who should at the end be functionally active in the line of the nation’s economic activities.

The Osun State Commissioner for Information and Culture, Hon. Adebisi Obawale Simeon, represented at the occasion by Mr. Adeniyi Samuel, Coordinating Director of Tourism in the state ministry said vocational skill acquisition and empowerment will go a long way in bridging the existing gap in relevant skills in the country’s Arts and Crafts entrepreneur for economic growth and development.

He expressed the appreciation of the Osun State government to NIHOTOUR and its leadership for bringing the vital human capital and capacity development exercise to the state, noting that his Ministry will continue to collaborate and partner with the Institute in all areas of capacity development for the Travel Tourism and Hospitality industry in the state.

Earlier in his welcome remarks, the Coordinator and Head of the Oshogbo Campus of the Institute, Dr. Tijjani Olawale Nasiru said the training couldn’t have come at a better time than now when the vision of the President Muhammadu Buhari’s administration is to lift millions of Nigerians out of poverty, adding that acquisition of vocational skills as embarked upon by NIHOTOUR, is the surest way to create jobs, fight poverty and enhance the living standards of the people.

The Oshogbo training program under the caption: SKILLS ACQUISITION AND EMPOWERMENT FOR YOUTHS AND WOMEN IN ARTS AND CRAFTS trained participants in batik and adire making, leather works, hair weaving, braiding and styling and shoe making by which they have been empowered to be self-employed and self-reliant. 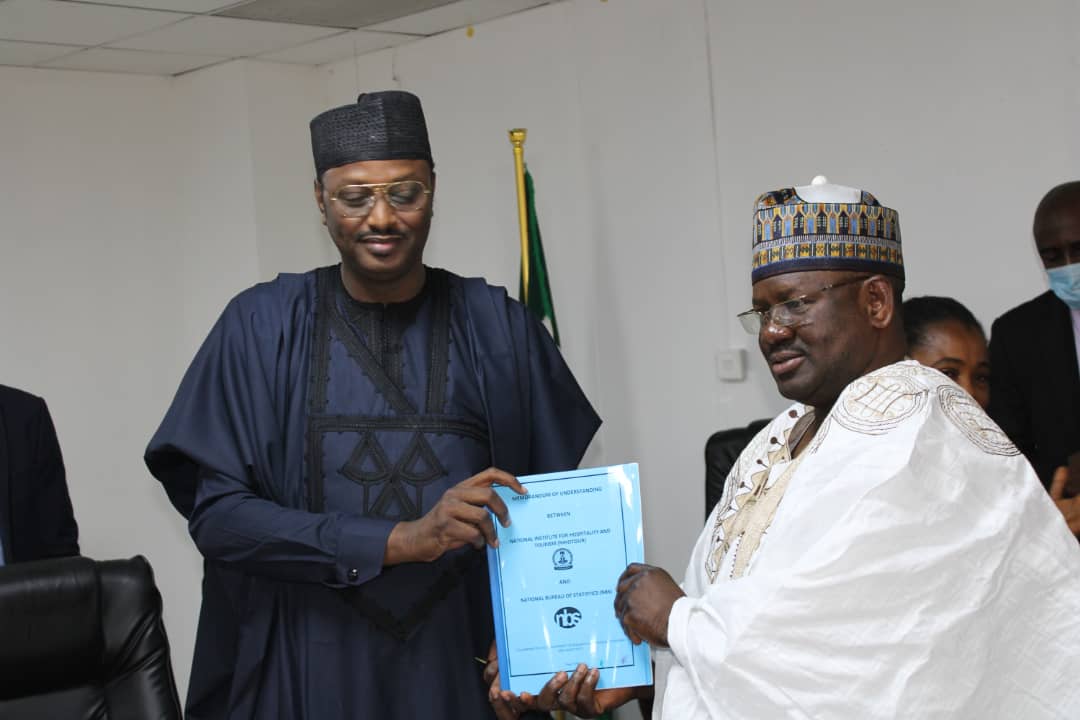 The Director General of the National Institute for Hospitality and Tourism (NIHOTOUR), Nura Sani Kangiwa has stated that the Memorandum of Understanding (MOU) signed between the Institute and the National Bureau of Statistics (NBS) is aimed at closing the existing data-gap in the hospitality and tourism industry of the country, noting that this will further deepen statistical development of sectoral databank necessary for planning within the sector.

Kangiwa who stated this in Abuja during the signing ceremony of the MOU with the NBS, further observed that Statistics are critical to national planning, sound policy development and informed business decisions, and that because research is an integral part of NIHOTOUR’s mandate, it becomes imperative to seek partnership with NBS as an exclusive agency in verifying, approving, administering and publishing basic national statistical data for national economic and social development.

He said for NIHOTOUR to effectively carryout its mandate as a research and allied institution saddled with the responsibility of the training of manpower needs in the Hospitality and Tourism industry as well as Coordinator of the Sector Skill Council in Nigeria, the Institute has established a vibrant Research and Development Unit to conduct industry-based research and generate data for the use of the industry, noting that partnership with NBS will fast-track the duties and functions of the Unit.

While he expressed his appreciation for the positive response and prompt action of the Bureau in ensuring a comprehensive package of the MOU, Kangiwa called for better synergy, cooperation and understanding in the successful implementation of the agreement for the benefit of the two agencies in particularly in the discharge of their mandates, and for the socio-economic benefits of the country in general.

In his remarks at the occasion, the Statistician General of the Federation, Dr. Simon B. Harry, reiterated the relevance of data in policy formulation and implementation for national growth and development, assuring that NBS is prepared to work assiduously with NIHOTOUR in its efforts at addressing the dearth of accurate data in the nation’s hospitality and tourism industry.

Dr. Harry who observed that the absence of accurate data has been the bane for the abysmal performance of sectoral industrial growth and development, further noted that figures and information gathered cannot be said to be usable data until they are found to be accurate, verifiable, accessible, and available for user needs which essentially is what the Bureau intends to achieve for all sectors of the country.

He then stated that the partnership between the Bureau and NIHOTOUR is a welcome development, adding that he looks forward for more of such partnerships with other Ministries, Agencies and Departments in the public sector as well as the Organized Private Sector for the general and overall growth and development of the country.

Management staff of both Agencies who were at hand to witness the signing ceremony of the MOU, expressed happiness for the synergy saying it will improve Inter-Ministerial, Department and Agency relations of the public sector of the country.