Joel Ajayi
Huawei Technologies Co., Ltd. has consciously and consistently pulled great efforts in supporting the development of Nigeria owing to the astronomical growth in the youth population. The 21st century has seen the rapid advancement in technology revolutionizing the world and Nigeria is not left out.

Huawei’s vision in Nigeria is to create an ICT ecosystem which will form the foundation in the digitalization plan for the nearest future. This is important given that advancement in digital technology knowledge will facilitate the national economic diversification plan and also provide job opportunities for Nigerian youths.

Huawei has been on the Nigeria soil for over 21 years. The company has donated state of the art ICT equipment to over 20 schools and ICT educational institutions across Nigeria through its Corporate Social Responsibility (CSR).

One of which was the remodeling of the ICT lab donated to the Government Secondary School, Ilorin, Kwara State. Speaking to the press, the National President of the Old Boys Association stated that it gladdens the heart of the students and teachers in the great institution to know that the students can digitally communicate, create, disseminate, store and manage information while teaching and learning via ICT.

The lives of the students of Ogedengbe High School of Sciences was affected by the kind gesture of Huawei one of the oldest serving schools in Ilesa, Osun State by providing new science laboratories, internally generated electricity, water supply, tables and chairs.

The School Principal, Mrs. Felicia Orimoogunje, lauded Huawei for the supportive development of Nigeria through technology innovation, knowledge transfer, talents training and CSR activities. She stated that Huawei has improved the knowledge and exposure of over seven hundred senior secondary school students and placed them on a pedestrian for success in the nearest future.

Recently, Huawei Technologies Co., Ltd, in partnership with the Special Intervention Program on Communal and Societal Development (SIPCOD) upgraded and equipped an E-learning Centre to with 58 state-of-the-art computers among others in Sardauna Memorial College, Kaduna State. This gesture was to enable to student compete favorably in the global world.

The principal of the school, Mr. Jamare Tukar stated that since the upgrade of the E-Learning centre, the teachers have had a splendid time imparting knowledge to 1,022 students. The students can now compete favorably with their counterparts in the world.

He further explained that the E-Learning Centre has gone a long way in bridging the Information, Communication and Technology (ICT) gap in the school. Huawei has stayed committed to the lives of Nigerians across different social classes.

Through Huawei’s CSR programmes ample opportunities have been extended to students across Nigeria. Students now have a chance of being successful in ICT.

Huawei will continue to invest in this collaboration with various schools. The beneficiaries of this initiative is expected to increase greatly and continously as various e-learning centers would be built across Nigeria. 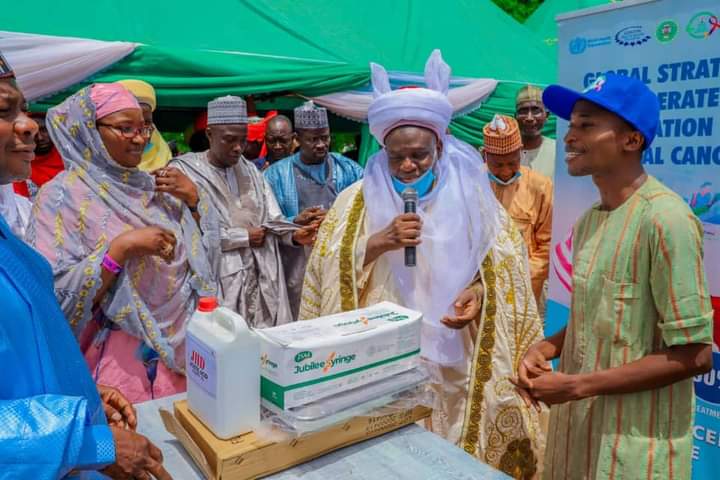 The program is a partnership between Clinton Health Initiative CHAI, World Health Organisation, Kebbi state Government and Medicaid Cancer Foundation. It is in line with the Global Strategy for the Elimination of Cervical Cancer. Kebbi State Government under the leadership of H.E Senator Abubakar Atiku Bagudu has scaled up the coverage to 40,000.

Distribution of commodities for Cervical Screening to the Principal Medical Officers of the selected centres for the screening was also held during the laudable program.

The First Lady of Kebbi State and Founder of Medicaid Cancer Foundation, Dr Zainab Shinkafi Bagudu, who spoke at the Flagoff ceremony urged that women should be encouraged to partake in the Screening saying, “traditional rulers have a big role to play in this program.”

She assured women in the state that screening for cervical cancer is safe and there is no risk of losing body fluids and womanhood contrary to myths related to the process. She debunked the rumours that say the screening takes away a woman’s sexual sensation. Dr Bagudu gave a physical demonstration of the extent of cervical cancer. Out of 12,000 women diagnosed annually, over 8000 will die. She also showed the thermal ablation device used for the treatment of early lesions which are available in all the 10 pilot hospitals running the program.

Dr Bagudu expressed her gratitude for the support of His Excellency saying that with this program, Kebbi state has been put on the global map of cervical cancer elimination. “Many countries are on their way to being declared cervical cancer free and we are hopeful that Kebbi state will soon join them.”

She stated that the State Government and the partners had paid for the program, and as such, the efforts should not be allowed to be wasted. She urged health workers to champion the cause in their various workplaces.

She thanked the Governor, His Excellency Senator Abubakar Atiku Bagudu for his enormous support and the support of the team and all the critical stakeholders.

Also speaking, the SSG, Alhaji Babale Umar Yauri, representing the Governor of Kebbi State, His Excellency Senator Abubakar Atiku Bagudu, commended the First Lady for dedicating all her life to the development of women and children.

He said that the State Government has done a lot to ease the suffering of cancer patients in the state, with the collaboration of Medicaid, WHO and other partners.

He announced that no fewer than 5,000 women will be screened under the programme, with 1600 so far screened. He added that the treatment for the women would commence immediately after the screening, with facilities provided at Sir Yahaya Memorial Hospital, Birnin Kebbi and the Kebbi Medical Centre, Kalgo.

The SSG further stated that the Screening will be made a routine across the state, with over 35,000 women to benefit from the screening and treatment for all forms of cancer.

He stated that adequate provision has been made to cater for the people of the state under the cancer indigent fund, among other interventions.

The State Health Commissioner, Hon. Jafar Mohammed said that the state has worked tremendously in bolstering the cancer control Programme.

According to him, various facilities have been provided to boost access to the cancer control Programme. The Commissioner further stated that the five-year cancer control Plan was deliberately aimed to achieve effectiveness in cancer elimination.

He acknowledged the unwavering support of the Governor and H.E Dr Zainab Bagudu for cancer control. He disclosed that no fewer than 360 people had benefitted from the Indigent Cancer Fund with cash support, chemotherapy, radiotherapy and diagnostics investigations, leading to treatment, among others.

The Sarkin Kabin Jega, Alhaji Bawa Arzika while appreciating Dr Zainab Shinkafi Bagudu for launching the screening program in Jega, urged women to take advantage of the program and disregard any rumour against it.

He pledged the sustained support of the program by traditional rulers and thanked Governor Abubakar Atiku Bagudu for the ongoing infrastructural projects in the state.

In their brief remarks at the occasion, the Chairman of Birnin Kebbi Local Government who is also the ALGON Chairman, Alhaji Ahmad Aminu Sarkin Fada and the Permanent Secretary Ministry of Women Affairs, Hajiya Aishatu Maikurata all urged women to come out en mass and get screened.

The First Lady along with other VIPs presented Cervical Cancer Screening Materials to Principal Medical Officers (PMOs) of the all the General Hospitals designated as cancer screening centres in the State. Soaps, money was distributed to over 200 women screened at the flag off.