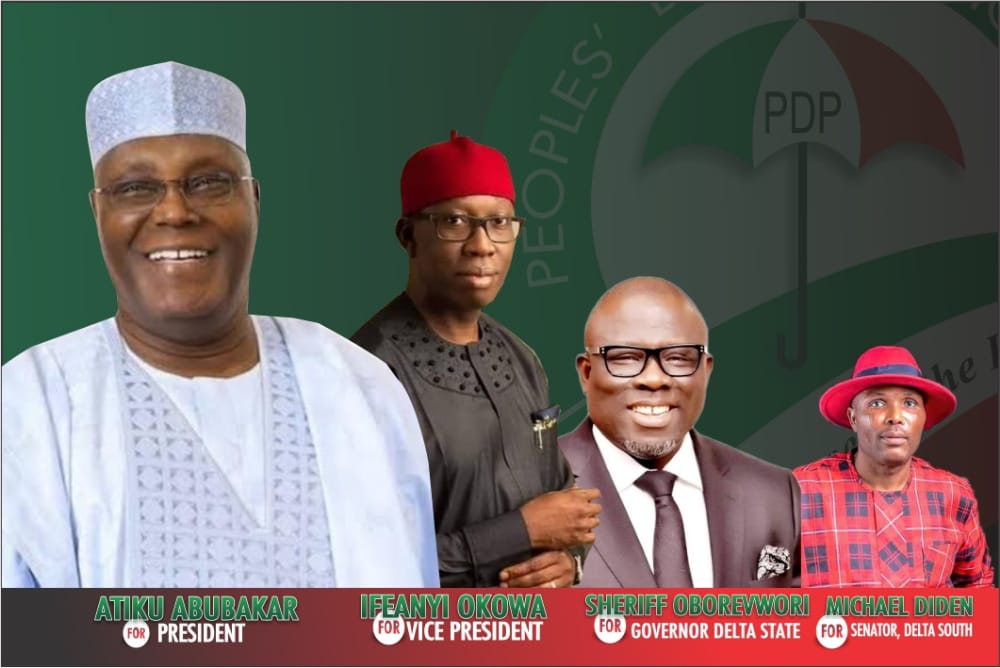 What Nigerians and Deltans need at this critical time in history is a Pan-Nigeria President/ Vice President, as well as a Pan-Delta Governor and Senator that will reverse the economic downturn of our beloved Country-Nigeria, and Delta State.

Thus, If hopefully elected into office as the President/ Vice Predident of the Federal Republic of Nigeria, Governor of Delta State and Senator representing the Delta South Senatorial District by the special grace of God, H.E Atiku Abubakar, Sen. Ifeanyi Okowa, Rt.Hon. Oborevwori and Chief (Hon.) Diden will no doubt respectively promote unity both at the National and State levels through feasible and viable Policies, Programmes and Projects that will secure mutual trust and confidence towards fast tracking the much expected human capital, socio-economic and infrastructural development of the Nation and Delta State in a bid to enhance democracy and good governance.

It is also worthy of note that their innovation, outstanding performance in politics , leadership, entrepreneurship and contribution to humanity has earned them the admiration of all.

Consequently, the Delta State Political Vanguard (DPV) will continue to work assiduously by strategizing with relevant stakeholders, and accordingly working out viable modalities for the overwhelming victory of Atiku/Okowa, Rt.Hon. Oborevwori, Chief Diden and other PDP Candidates in the forthcoming 2023 general election by the special grace of God.

PDP
Power to the People