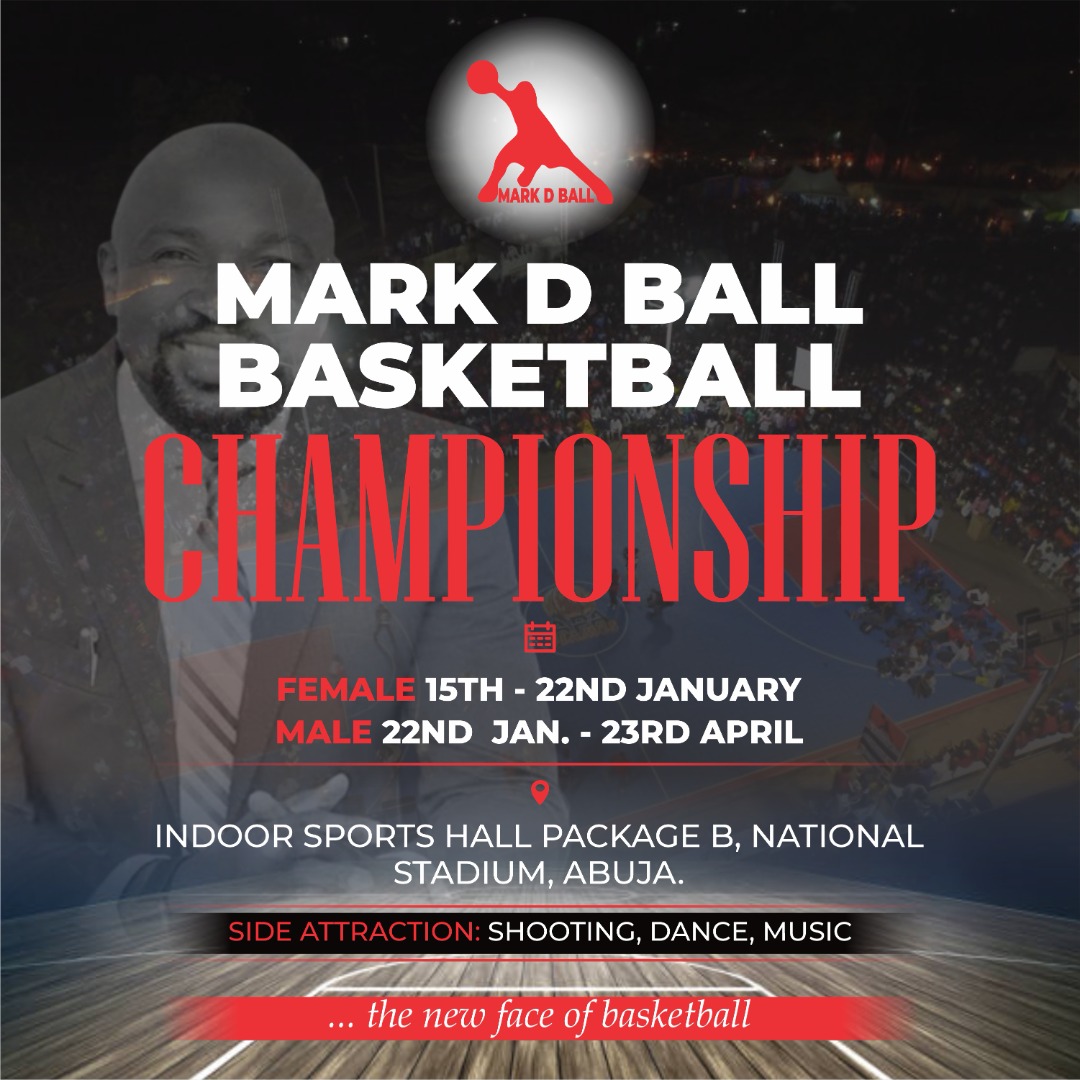 Ahead of the Mark D Ball Basketball Championship billed to commence on January 15, in Abuja, Organiser has announced 16 teams for the basketball tournament, an increment from the 12 teams announced during the unveiling.

Secretary of the Local Organising Committee LOC, Umaru Abdullahi in a statement issued on Monday, explains that 16 teams were chosen because of the clamour from clubs to participate after being starved of championships/tournaments.

According to him, upon consideration of requests from clubs to participate in Mark D Ball Championship, We (LOC) decided to increase the number of participating teams from 12 to 16.

“It is glaring that the appeal from clubs is due to a drought of basketball games for a long time, and we decided to increase the number to accommodate these requests. “Abdullahi stated.

Abdullahi’s statement added that all participating teams must adhere strictly to all Covid 19 protocols.

Mark D Ball Basketball Championship will dunk off at the indoor hall of the MKO Abiola Stadium on January 15, 2022.

Athletics: My role in sports is now advisory-Alli

The Chairman of the Nigeria Basketball Federation, NBBF Electoral Committee Lanre Glover has advised the various Basketball stakeholders to make haste and come forward to pick their nomination forms, as submissions have been extended to 5pm on Thursday 27th January 2022.

Chairman of the NBBF Electoral Committee, Dr Lanre Glover, confirmed that the deadline for submission of the nomination form has been extended to Thursday, January 27, 2022 at 5pm.

“In view of recent developments, the NBBF Congress has authorised the Electoral Committee to extend the deadline for submission of nomination forms for the NBBF Election scheduled for 31st January 2022 to Thursday 27th January 2022”, Dr Lanre Glover said.

He however emphasised that all documents must be received by 5pm of the stated date.

The Electoral Committee Chairman stated that, completed forms and relevant documents must be sent by email to lanreglover2005@yahoo.com.
The elections will hold in Benin, Edo state as jointly agreed by the Congress of the NBBF at the Extrordinary Congress held on 9 October 2021 in Abuja.

Meanwhile, some concerned Basketball Stakeholders in Nigeria have decried moves aimed at disrupting the NBBF Elections slated for 31st January, 2022. These individuals under the aegis of a so – called Association of Ex Players, on Monday stormed the Federal Ministry of Youths & Sports threatening fire and brimstone to lead protests on the streets, if the Sports Ministry does not stop the elections.

This is coming at a time Basketball stakeholders law are heaving a sigh of relief due to the upcoming elections that will bring the game back to normalcy for the benefits of our youths, it is disheartening to watch as these individuals plan to put a cog in the wheel of our collective progress.

According to Hon Fubara Fibika a stakeholder, speaking from Portharcourt “This is an unfortunate development. Nigerian basketball is too big for a group of aggrieved individuals to hold everyone to ransome. The Honourable Minister of Sports has taken the best line of action by allowing the NBBF to conclude its Congress and Electoral Process which was put on hold, at the request of the FMY&S, after it commenced in line with the provisions of the 2019 NBBF Constitution 3 months ago.

We questioned the credentials of those involved in this anti – social behavior, which is aimed at bringing the game to disrepute in country.

The Friends of Nigerian Sports, FNS, a group of sports journalists, Stakeholders and enthusiasts States; through its Spokesman Akeem Busari queried the credibility of the so called ex-players, and asked them not to hinder the ambitions of some credible individuals willing to contest the various positions. They encouraged stakeholders to heed to the calls of the Electoral Committee to pick the Nomination Form to join the race rather resort to a tactics that is damaging to the game in the country.