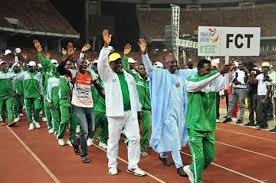 A Stakeholder in sports has appealed to authorities of the Federal Capital Territory Administration, FCTA for early release of funds for the athletes that will represent the FCT at the forthcoming 2020 National Sports Festival,  NSF in Edo, Benin city.

Tolulope Oguntimehin, a sports journalist and Vice Chairman, Sports Writers Association, SWAN, FCT chapter made the call in an interview on Monday.

He decried the unpleasant experiences Team FCT has experienced in past festivals including the 2018 edition as well as the just recently concluded National Youth Games in Ilorin.

Mr. Oguntimehin, therefore, called on the FCTA authorities to commence preparations ahead of time so as to avoid the ugly experience of 2018.

According to him, early preparation remains one of the important tools to improve on the performance of the Team FCT at the National event next year.

“We do not want what happened in the 2018 festival to repeat in 2020 in Edo State. I therefore appeal to the FCTA, FCT Social Development, and FCT Sports Council to commence immediate preparation and release of funds for athletes to raise the name of FCT high in Edo come to 2020 NSF.

“I am calling on FCTA to please release the fund for early and better preparation. We don’t want the experience of 2018 where athletes were left with no option than to protest before their allowances were paid them,

“In 2018, there were series of unpleasant stories regarding the welfare of Team FCT athletes as many resorted to carrying placards in protest of nonpayment of camp allowances.

“We do not want these experiences anymore. Sports should be given priority attention and necessary funds released on time for effective camping, preparations, and performance. FCT has all it takes to challenge Delta, Lagos, Rivers and other big states for the best sporting state in the country.

“I appealing to FCTA  under the leadership of Malam Musa Bello for early and prompt release of funds that will enable athletes in FCT  to start preparation as soon as possible,” he said.

It could be recalled that late preparation for the 19th edition of the NSF by Team FCT was a cog in the wheel of athletes’ performance at the 2018 edition held at National Stadium, Abuja.

The National Sports Festival was evolved to foster unity and help unearth new talents in the country. Described as Nigeria’s Olympics, it has produced prominent athletes for the country who had gone on to win continental and global medals for the country.

The festival, however, went into hiatus from 2012 but the intervention of the former minister of youth and sports, Solomon Dalung, who, despite daunting challenges, restored the festival in 2018.