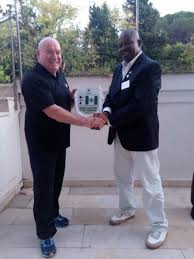 NIGERIA  SHOOTING SPORT FEDERATION (NSSF) is set to begin trials for its Shooters in preparation for the forth coming AFRICAN SHOOTING SPORT CHAMPIONSHIPS (ASSC) billed for TIPASA, ALGERIA.

ADEOYE said the AFRICAN CHAMPIONSHIPS would not just be a convergence of Professional Shooters from across Africa but would also serve as an avenue for Nigeria to pick OLYMPIC QUALIFICATIONS for its athletes towards the 2020 TOKYO OLYMPICS GAMES.

Speaking further, ADEOYE said some Nigerian Shooters who missed the MINIMUM OLYMPIC QUALIFYING marks in the past will have the opportunity to pick the minimum points required to gain the Olympic tickets.

According to him “we have veteran athletes and young shooters already in Abuja for the camping trials which begins on Thursday 7 November 2019.

“The trials will have serving and retired officers from the Nigerian Army, Navy, Airforce, Police and the Department of state services alongside civilian shooters”

“It is not only  the Armed Forces affairs but a battle of  marksmen and women, young and Old” he said.

ADEOYE said the likes of MAJOR GENERAL JG HAMAKIN (RTD), WARRANT OFFICER BARAU WAZIRI and CORPORAL YETUNDE OLABODE (RTD ) all from the NIGERIAN ARMY will participate in the trials.

The NIGERIAN NAVY will be represented by ADA IKEVUDE while the AIFORCE will supply MASTER WARRANT OFFICER MADU ABDUL.

Shooters from the DEPARTMENT OF STATE SERVICES (DSS) including ATABO SUNDAY, KINGSLEY OKEREKE, ADEWUNMI CHARLES  and Nora Ekpeyong would vie for honours.

The NIGERIAN POLICE will be represented by RAMAN ADISA, FATIMA MUHAMMED amongst others.

The Security and Civil Defence Corp will be represented by Faleye Abraham, Gbemisola Seun, Ojurayo Sheriff Adegoke and Kayode Lawal.

The Civilian Shooters expected to take part in the 3-DAY trials are TUNDE AKINTIMEHIN ( LAGOS), OKPOSO ESUBO and KATE OTITI both from DELTA STATE  and ADAEZE PRINCESS.

Young and upcoming Shooters including the revelations of the last NATIONAL YOUTH GAMES in ILORIN KWARA state will also be attending.

From the information made available to the Press, OYEGBADE AYOMIDE, ADEOYE TIWALADE, AZAGBA EMMANUEL, FADEREMI DANIEL will be competing in the MALE JUNIOR CATEGORY while the likes of TORIOLA OLUWAKEMI, ONOME PRECIOUS, SANUSI MARIAM and LOGUNLEKO OREOLUWA will participate in the JUNIOR FEMALE CATEGORY.

The trials are expected to take place at the SHOOTING RANGE of the MOSHOOD ABIOLA INTERNATIONAL STADIUM, ABUJA from 7th 9th of November 2019.

The Honourable Minister of Youths and Sports development, HONOURABLE SUNDAY DARE will be the guest of honour.