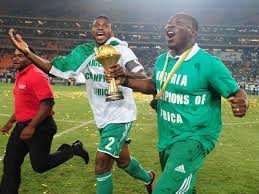 The Chairman of Sports Online Publishers Association of Nigeria (SOPAN), Comrade Martin Odiete has urged the Nigeria’s Super Eagles to go for glory, even as Association wished the team all the best in the forthcoming 32nd African Cup of Nations in Cairo,Egypt.

The three – time African Champions (Super Eagles) were conspicuously missing in the two editions of AFCON, notably at 2015 Gabon /Equatorial Guinea, and Gabon 2017 which were won by Ivory Coast, Cameroon respectively.

However, the Nigeria’s pride, Super Eagles are back in Africa Cup of Nations contention since they won the 29th edition at South Africa in 2013 under late Stephen Keshi.

Acccording to the statement, It gladdens our hearts that Super Eagles have returned to AFCON after not qualifying for the previous and last editions.

“We followed through the qualification series, starting from the primordial defeat to South Africa in Uyo but Super Eagles were resilient in their quests to be part of 32nd Africa Cup of Nations in Egypt as they became the eventual leaders of the same group.

“SOPAN have total confidence in the current set up our darling Super Eagles players. We strongly believe in technical committee of the Nigeria Football Federation headed by Ahmed Yusuf Fresh, and the coaching crew led by Franco -German, Gernot Rohr that Eagles are not just going to participate, but to compete with other African giants in Egypt.

“We make bold to say, Eagles have the wherewithal to bring the Silverware to Nigeria at end of the Africa Cup of Nations holding in Egypt; we would continue to give our unending support as they make progress In the competition,” he added.

SOPAN also commended the efforts of Amaju Pinnick led Nigeria Football Federation for the wonderful preparations given to Super Eagles as they go for the ultimate prize in 2019 AFCON in Egypt. Eagles played a goalless draw with Brave Warriors of Zimbabwe at Stephen Keshi stadium in Asaba, but were pipped 1-0 by Teranga Lions of Senegal in Ismailia earlier this week.

Nigeria is drawn alongside side Burundi, Guinea Bissau and Madagascar in Group B.