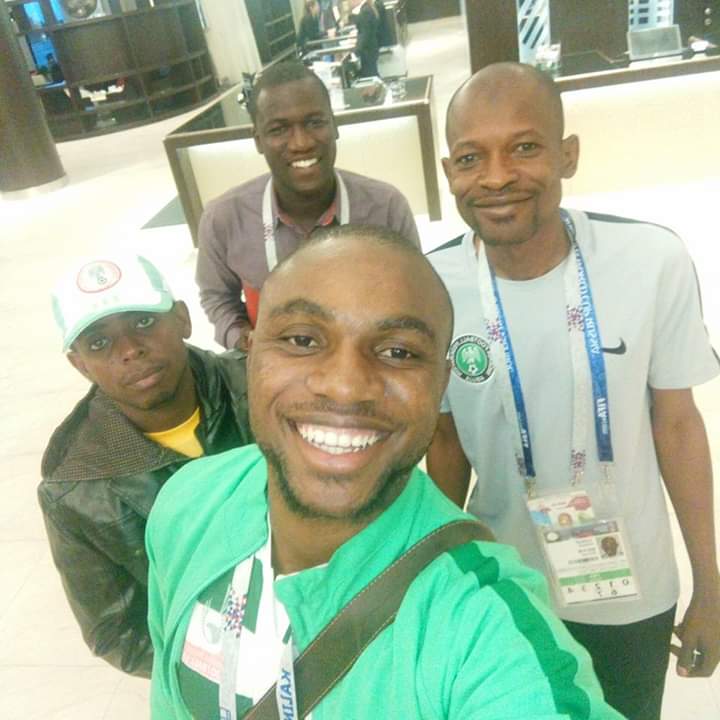 Few years ago, May 23, 1970 was a day off for people residing in the area where a King of Grassroots football development in Nigeria was birthed. This was the moppet that became Comrade Ahmed Yusuf ‘Fresh’, which I nicknamed as “Jesu ti oni igee”, meaning Jesus without big a chest.

Upon his arrival into this miasmal world, herald angels went around the nation to announce the arrival of this small king and of course, his news was therapeutic for everyone in that community, as it created atmosphere of endless joy whilst receiving the news.

In fact, eye witnessess confirmed that even witches and wizards, naysayers and other unauthorized messsgers bowed because Fresh came into this with heaven’s factory- fitted anointing of greatness. In other words, Ahmed Yusuf was behallowed by almighty Allah, so nefarious beings had to be “Still” because his case was thou shalt not touch my anointed Man; reason Fresh has been a mystery for evil plotters from gestation period.

Is Ahmed Fresh a Man from Grass to Grace? Oh yes, he’s, base on his life’s  journey(s) thus far:

He hails from a family that values proper Education thus, it would be immature for people to postulate, Fresh didn’t go to school as I consider it Bunkum. Authoritatively, Ahmed fresh passed through the Pedagogy of quality Education, from Chiroma primary school to Government day Secondary school- both in Minna, Niger state . Fresh is someone with foresight, he didn’t hesitate to further more on his Education, as he attended Kaduna State Polytechnic where he acquired knowledge in “Quantity Surveyor”

The “F” in his alias stands for Football, this is connected to why he derives pleasure in developing football Talent(s) at the grassroot level. The Golden Jubilee Ahmed Yusuf became Niger State Football Association outset of Millennium (year 2000). Prior to this period, Football administrators and stakeholders in the Power State have besieged his home countless times where people continuously bespeak him to come pilot the affairs of football structures in Niger State.

Ahmed Fresh was having inertia towards such request but it was not as though, he is paranoia agent, however he believes God does his wonders accurately; Hence, he decided to leave his Cocoon and those with inalienable Rights-enthroned him as the State’s football chairman.

Ahmed Fresh moves about with Pod that contains action in motion. He understood that, becoming the head of football house means, you must be a Supreme thinker. So, he set up a Committee that was charged with identifying the encumbrance(s) of Niger State Football Association and its structures.

Having explored what truly went wrong, this Committee of deep thinkers came up with their findings and of course, Fresh as a critical thinker agreed to work on what was given to him and even added his own magistral solutions for the maladies discovered in Niger State Football environment.

There are over 22 Local Government(s) in Niger State with Eight (8) Emirates council. As an intelligent person, he created chain(s) of football developmental programs for all the 8 Emirates in the Power State and that gave birth to different football talents in his State. He uses football to preach Unity all over Niger State because he’s a Freshman with toga of Peace.

Ahmed Yusuf is one of the three star General(s) in Nigeria Football Federation hierarchical structures. We have renowned Football administrator, Chief Felix Anyasi Agu from Abia and also Honorable Yahaya Suleiman Kwande representative of Jos. Historically, these are the three Musketeers in Nigeria football systems chronologically.

Comrade Ahmed Yusuf has been nominated for appointment at Confederation of Africa Football ( CAF), as a member of Technical and Development Committee for sixth term, 12 years of serving African Football.

My aim is not to bore my readers, football administrators, stakeholders and Ahmed Yusuf (Fresh) community  of friends but to make his 50th birthday celebration a fulfilling day; which should allow the whole world to know Fresh’s personality. Let me say this, to those who know Fresh remotely, and have illegitimately deduced his personality. For the record, Ahmed Yusuf Fresh is not a proud person neither is he infallible.

He’s a Self effacing personality, not a Sociopath but a Socializer. For his persona, he’s a patriot, and very passionate about moving Nigeria football systems forward, sufficient to say, Fresh is not a Psychopath.

Today is your birthday, I wish you well, a complete Nigerian who never stopped exhibition of his altruistic nature to people from different Ethnic groups, Religious beliefs in Nigeria and globally.

Unknown facts, Fresh is “Laissez -Faire” kind of person. He minds his business and wants everyone to succeed. You are celebrating your 50th birthday in good health condition, I know the wind of life is changing you from who you are but don’t let the society configure you wrongly.

You are a Freshman, you should be in control of Air, I want you to be the Airbender. No doubt, the responsibility of being a leading figure can be staggering but every great man has tripped. This is not a problem but it becomes a permanent challenge when you remain on the floor.