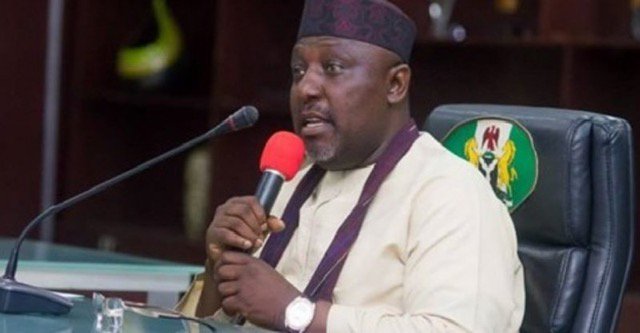 A high court sitting in Imo state has directed the Independent National Electoral Commission (INEC) not to issue certificate of return to Rochas Okorocha as senator-elect for Imo west senatorial district.

Ngozi Ukoha, a judge, restrained INEC from “departing from its decision not to issue a certificate of return in respect of Imo west senatorial district election.”

A copy of the judgement dated Tuesday, June 11, was seen by TheCable.

The commission had refused to issue the certificate to Okorocha who was declared winner of the poll after the returning officer reported that he declared the former governor winner under duress.

But INEC said it would meet to consider the the order of the federal high court, Abuja, which asked it to issue the certificate to Okorocha.

The latest court order is the third on the issue, coming after that of the federal high court and a May 23 order from the high court of Imo directing INEC not to issue a certificate of return to any of the candidates in the election.

INEC is expected to announce its decision on the matter later on Tuesday.

Okorocha had earlier been denied accreditation when he arrived the National Assembly Complex for the ongoing inauguration.