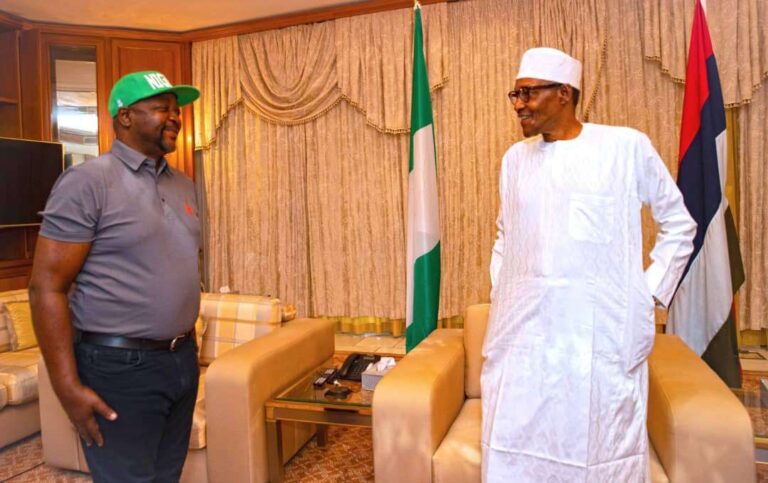 Notable leaders of the Oyo State chapter of the All Progressives Congress (APC) have declared support for the Minister of Youths and Sports Development, Chief Sunday Dare, declaring that any group within the party that tries to rubbish his efforts to ensure the party’s victory at state and national levels is further destroying the chances of their sponsors.

A leader of the party close to Honourable Dare, who spoke on a news item that circulated on the internet on Tuesday, purporting that the minister was engaging in anti-party activities, said the development was a plot that has already failed.

Craving for anonymity, while he said “the purveyors of the divisionism are causing more problems for the unpopular and generally unaccepted gubernatorial candidate of the party.

The minister’s ally fingered the state APC
governorship candidate, Senator Teslim Folarin, and some reactionary elements in his company in the unwarranted attack and blackmail of the minister.

The online report had reported that “a political group, Ojo-Oola Oyo, said the Minister of Sports and Youths Development, Sunday Dare, would
later regret his anti-party activities and recent secret endorsement of the governor of Oyo State, Seyi Makinde, for a second term.

But the party leaders said the statement came from a “faceless group in the party who are out to dent Sunday Dare’s reputation with
amateur, cheap and crude blackmail,” adding that “the quality and characters of the people behind it do not warrant a response from the
minister.”

NYSC to Partner CBN On E-Naira For Corps Members

….The error is grave and may jeopardize INEC’s preparations for elections

…Enjoins voters to collect their PVCs

The Centre for Credible Leadership and Citizens Awareness has called on the Independent National Electoral Commission (INEC) to remove the name of Chief Victor Oye’s name on its website as the Chairman of All Progressives Grand Alliance (APGA), saying it is a grave error that has the tendency of negative interpretation.

The Director General of the coalition of over one hundred civil society organisations, Dr. Gabriel Nwambu while addressing a press conference in Abuja Friday afternoon said INEC appear not to have obeyed the verdict of the Supreme Court which declared Chief Edozie Njoku as the authentic chairman of the party.

Part of the address by the coalition reads:

“As a coalition, we have observed with keen interest the controversy surrounding the corrected version of the Supreme Court Judgment of May 9, 2022. Despite the controversies, the lead Justice of the Panel Hon. Justice Mary U. Peter-Odili (Rtd), in order to ensure that justice prevails, had to write from retirement to clarify all parties that Chief Edozie Njoku was the National Chairman of the All Progressive Grand Alliance (APGA) that was wrongly removed at the Jigawa State High Court.

“In her letter dated November 7, 2022, the lead Justice and other members of the panel pointed out the misconception arising from the slip of pen and tongue on paragraph 1 of page 13 of the October 14, 2021 judgment and that this error had long been corrected.

“Interestingly, all the parties to the suit including INEC were duly served. This notwithstanding, the Commission is yet to honor the Supreme Court Judgment.

“A few days ago, January 19, 2023, the Chief Justice of Nigeria through the Chief Registrar of the Supreme Court, while admitting that Chief Victor Oye’s name was ‘erroneously inserted’ in the Judgment further confirmed Chief Edozie Njoku as the National Chairman of APGA and requested him to come forward with a motion to the Court for the regularization of the corrected version of the Judgment.

The coalition said it normally conducts Electoral Risk Assessment (ERA) and in its last week session, it reviewed possible risks to the coming election during which risk experts made it clear to that the retention of Chief Victor Oye’s name on INEC website and his subsequent recognition as APGA National Chairman by INEC poses the greatest risk to the 2023 General Election. Chief Victor Oye couldn’t have fielded candidates for the Party, when he truly knows that he wasn’t the National Chairman of APGA.

“We, as a coalition of Civil Organizations, would like to reiterate our confidence and abiding faith in Prof. Mahmood Yakubu’s led INEC and its National Commissioners.

“It is our firm belief that Professor Mahmood Yakubu would conduct transparent, free, fair and credible elections on the February 25, 2023 and March 11, 2023 respectively. But, we still wonder why the Commission is still dealing with Chief Victor Oye as the National Chairman of APGA”, Dr. Nwambu stated.

The rest of the text of the address reads as follows:

“Clearly, this is a direct affront to the Supreme Court Judgment. We wish to state that it is the perception and integrity of INEC that inspires and confers confidence and credibility to the electoral process.

“Consequently, we, hereby call on Professor Mahmood Yakubu to take urgent steps to attend to this ugly trend which is impacting negatively on the image of the Commission and confidence of the electorates on the Commission.

“We wish to make it categorically clear that we are neither members of the APGA nor any other political party, but we insist that the right thing should be done.

“Therefore, in the spirit of fairness and justice, we urge Professor Mahmood Yakubu and the Independent National Electoral Commission (INEC) to look into the name of Chief Victor Oye on their INEC’s website because it sends the wrong signal both home and abroad.

“As you all know, the primary role of the Civil Society Organizations (CSO) is to act as the watchdog of the society. And, as Plato puts it

“The price good men pay for their indifference to public affairs is to be ruled by evil men.’

“Essentially, our duty is to ensure that Rule of Law and the Separation of Powers amongst the three tiers of governments function optimally to foster growth and development in the polity.

“It is our responsibility to ensure that all the components and structures of government operate in such a way that places the Rule of Law above all else.

“It is our constituency to also observe the degree of compliance by the Election Management Body (EMB) ie the Independent National Electoral Commission (INEC), the Political Parties, the electorates, and the three arms of government to the Constitution, Electoral Act and Court Judgments.

“Finally, we wish to advice all registered voters to go and collect their PVCs as votes must count in the general elections. This is the confidence which the introduction of the BVAS technology inspires”.