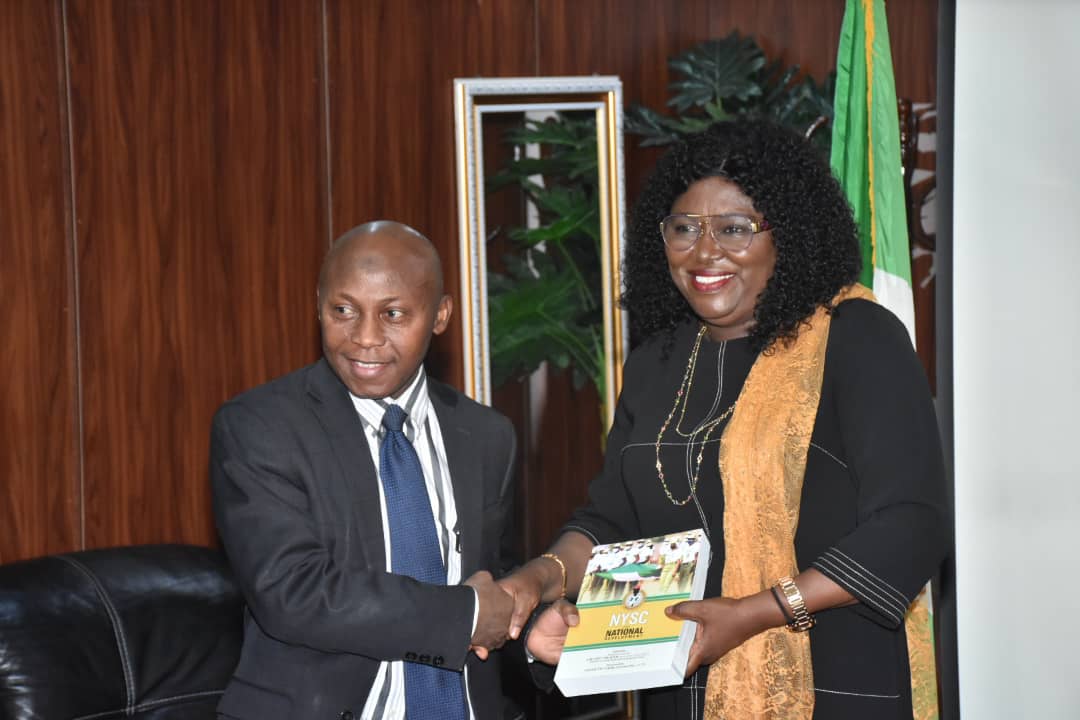 The Central Bank of Nigeria has requested for partnership with the National Youth Service Corps on the use of internet money for Corps Members.

It also said the electronic platform would offer it’s users the ease of payments at no risk.

The Deputy Director, Information Technology Department of the Central Bank of Nigeria, Mr Habib Yusuf, stated this yesterday when led some staff of the apex bank on a courtesy visit to the NYSC National Directorate Headquarters in Maitama, Abuja.

He added that the e-naira, which is the first of it’s kind in Africa encompasses digital wallets which would allow onboarding of many users and off-line payments for goods and services.

He added that the electronic platform would also offer it’s users the opportunity of many innovations with ease.

In her response, the Acting Director General of National Youth Service Corps, Mrs Christy Ifeyinwa Uba commended the CBN for the innovation.

She said the Scheme is ready for collaborations that would make the service year memorable for the Corps Members.

Mrs Uba however, added that NYSC Management would consider the request from the CBN.

Nigerians Call For More Women In Governance, Say It Will Reduce Corruption

Exasperated by rising corruption in Africa’s most populous country, stakeholders in the fight against corruption in Nigeria have identified adequate inclusion of women in governance as an antidote to public sector corruption while lamenting the government’s effort in implementing the revised National Gender Policy (NGP).

The call for the inclusion of more women in governance had been necessitated by the low representation of women in Nigeria’s governance structures.

Speaking during the programme, Musa stated that Nigeria would be heading in the better direction if more women are deliberately handed opportunities in political leadership and public service as they embody the values, character and integrity, which is needed in building a corrupt-free nation.

She noted that Nigerian women are prudent and have been equipped to instill prudence, character and integrity in the mind of their children and can replicate these virtues in leadership positions.

“If we (government) put more women who are prudent in the government spaces, political spaces, corruption will reduce drastically because they are coming with values, character and integrity. We are not saying take any woman because she is a woman, we are saying take women who know what it means to be in political offices.

“If we select those women knowing they are influencers in their spaces doing fantastic and credible jobs with excellent value systems, Nigeria is headed for a better place.

“We have credible women, but they face barriers like sexual harassment at workplaces. Even in politics, we have a lot of women going into politics, but there are god-fathers who want to take advantage of the young women coming into politics. It’s beyond being credible and competent. It’s about creating an enabling environment for the woman to thrive,” Musa stressed.

On the government’s lacklustre approach on implementing the revised National Gender Policy, she revealed that the most effective tool in persuading the Federal Government to implement the policy remains sensitization, advocacy and peaceful protest.

Musa also regretted that implementation of the National Gender Policy is stifled by a lack of political will and urged the government to enforce the policy and place punitive measures on public offices that fail to align with the provisions of the revised NGP.

On her part, Communications Manager Mujidat Agbabiaka backed Nigerian women to do well if given more opportunities in leadership, emphasizing that women have what it takes to participate in leadership and make the country better. She added that women must be encouraged and empowered to take charge of administration because of their discipline and integrity.

Agbabiaka said, “We’ve seen women out there doing well in their leadership capacity and their homes are not broken. They still perform their maternal roles. They still take care of their families, their husband and children, immediate and extended families.”

Ahead of the 2023 general elections, she advised women not to sell their votes to politicians, urging them rather to study the manifestos of political parties and candidates in order to make informed decisions.

“We know the roles the politicians play in impoverishing the women further by giving them seasoning cubes and wrappers as if those things matter in politics and electioneering. We have said that these things are wrong and women should desist from accepting gifts but rather look inward into candidates and see what they are offering based on their manifestos.”

Some Nigerians who phoned into the programme from Abuja, the nation’s capital, alluded that Nigeria would be better governed and less corrupt if women were given more leadership opportunities owing to their antecedents from the home front.

PRIMORG and the Women’s Rights Advancement & Protection Alternative (WRAPA) are collaborating to promote the revised gender policy of the Federal Government for more opportunities for women in Nigeria.

Public Conscience is a syndicated weekly anti-corruption radio program used by PRIMORG to draw government and citizens’ attention to corruption and integrity issues in Nigeria.

The program has the support of the MacArthur Foundation