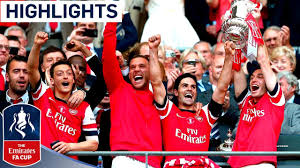 Arsenal in beating 10-man Chelsea has won the FA Cup and book a place in the Europa Cup. They have extended their remarkable number of FA Cup to 14. Incidentally, the match-winner, Aubamenyang wore shirt number 14!

He becomes the first African to captain an FA Cup-winning side. His coach, Arteta is also a record holder.

Arteta captained Arsenal to win the cup in 2014 after beating Hull City 3-2 to receive his first major honour in English football.

The Spaniard became the club’s manager last December and will be aiming for his first managerial success. Roberto di Matteo became the 17th man to win the FA Cup as both player and manager when Chelsea beat Liverpool at the Wembley in 2012.

And it’s a disappointment for Frank Lampard after his impressive first season in charge of Chelsea.