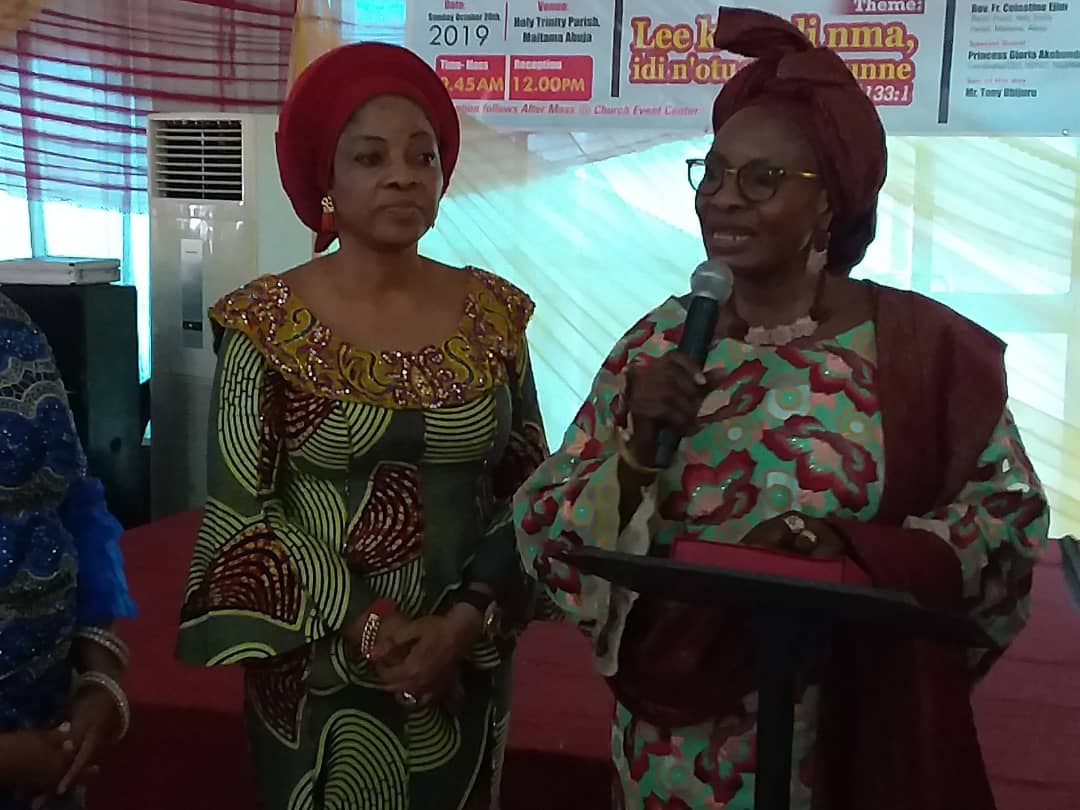 Akobundu made the dedication in her reaction to the honour being bestowed on her on Sunday during the 2019 Imo/Abia Day Celebration of Holy Trinity Catholic Parish, Maitama, Abuja.

According to the National Coordinator and illustrious daughter of Ibeme-Ugiri Constituency, Isiala- Mbano LGA, Imo state,  welfare of less privileged is very dear to her.

“For me, God first,  the people second. My ministry,  my life has been humanity.  Whatever makes grassroots people happy,  makes me happy.

“As a Princess from a well pronounced community,I’m a grassroots woman,  I belong to the people,  I know what it is to be down there.

So, I live with the grassroots people and I dedicate the award to them.

“I believe someday, someone from there will be the president of this country, ” she said.

Akobundu urged those in better position to always show some  kindness to the less privileged so that they too could be able to live a better life.

She commended St. Dominic (Imo-Abia)  Catholic Community and the entire parishioners of Holy Trinity,  Maitama for considering her worthy of the honour.

In her remark, Dame Pauline Tallen, Minister of Women Affairs, also an awardee described Akobundu as a supporter of the masses and a patriot.

We have to continue to encourage spiritual work”.

Princess Akobundu was also accompanied by some staff of the agency and other well wishers including Mr. Emmanuel Abang, a Special Adviser to Akobundu and other aides.

Under the stewardship of Akobundu, AUDA-NEPAD/APRM Nigeria among other achievements, recently organised high-level side line event at the 74th United Nations General Assembly in New York, U.S where President Muhammadu Buhari and other African leaders told the world to reject Illicit Financial Flows especially  from Africa.

During the UNGA event jointly organised by AUDA-NEPAD/APRM and EFCC Nigeria, President Buhari told the world that over 157 billion dollars had been illicitly taken out of Nigeria to other continents between 2003 and 2012, calling for repatriation of such funds so that Nigeria could meet up with 2030 target on Sustainable Development Goals (SDG).

The theme of the high-level side line event was ‘Promotion of International Cooperation to Combat Illicit Financial Flows and Strengthen Good Practices on Assets Recovery and Return to foster Sustainable Development ‘.

Success Makanjuola Dazzles As Leganes Wins On His Debut