The President of the Nigeria Labour Congress (NLC), Ayuba Wabba, has asked the Federal Government to backdate the implementation of the N30,000 new minimum wage backdated to April 18, 2019, when it was approved.

Mr Wabba stated this on Wednesday while marking Workers Day which holds yearly on May 1.

The President after signing the bill charged Nigerian workers and the Nigeria Labour Congress (NLC) to show more commitment to work.

On the just concluded elections, the NLC President appealed to aggrieved politicians who feel cheated not to overheat the polity but engage the judiciary for justice.

He also lamented the unemployment rate, the deplorable state of the nation’s textile industry and the power sector.

He called on the Federal Government to review the entire privatization exercise and come up with the best approach to deal with the challenges adding that incompetent investors are responsible for the power sector privatization failure. 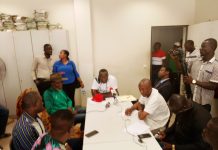 FG Condemns Illegal Use Of NYSC Uniform By Movie-Producer, Others