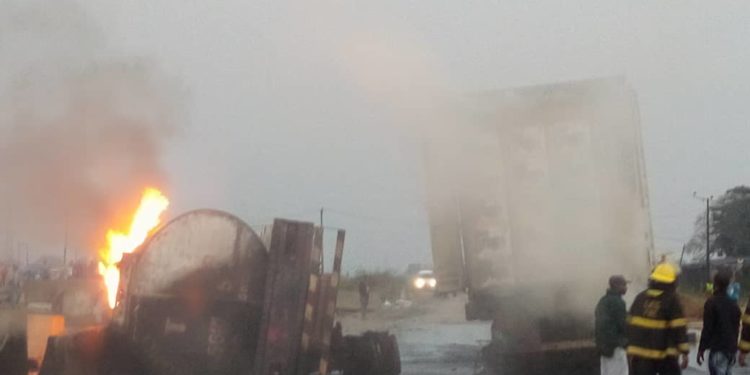 Hundreds of commuters were stranded and, at least, four people injured on Tuesday as a commercial bus, manoeuvring near a fallen fuel tanker, burnt beyond recognition, blocking the ever-busy Oke Afa-Isolo Bridge in Lagos.

The Faragon bus carrying 14 passengers burnt at 6.30a.m. When it was ascending the bridge connecting Oke Afa with Isolo, Okota and some others in Oshodi-Isolo LGA.

A witness told the News Agency of Nigeria (NAN) at the scene that four occupants of the bus were rushed to the Isolo General Hospital for treatment.

The witness, who identified himself simply as a financial expert, was driving a 2005 Toyota and closely following the burnt bus.

The witness, whose car was slightly affected by smoke at the rear, told NAN that the bus driver was among those rushed to hospital.

According to him, the bus’s exhaust pipe absorbed petrol from potholes into which petrol spilled on Monday evening when a tanker laden with fuel fell on the foot of the bridge.

He said that as the bus was ascending the bridge, the exhaust pipe scratched the bridge pavement and ignited fire.

An officer of the Lagos State Transport Management Authority (LASTMA) at the accident scene, confirmed that four of the bus occupants, including the driver, were rushed to the Isolo General Hospital.

He said that the other occupants escaped with little or no injuries.

NAN reports that the tanker marked LSD663XB fell at 5.15p.m. on Monday, blocking the bridge but traffic managers and firefighters worked hard to remove its content and took the vehicle off the road.

However, some fuel spilled into potholes near the accident scene.

The tanker was coming from the Ejigbo Depot.

A health worker at the Isolo General Hospital told NAN on condition of anonymity that four of the accident victims were rushed to the hospital.

He said that the driver of the bus and a female passenger were much affected by fire and had been referred to the Gbagada General Hospital.

He told NAN that one the remaining two, whose injuries were not severe, was being handled by the hospital, while the fourth victim, a student, had been taken home by her parents.

Mr Chibueze Okafor, the victim being treated at the Isolo General Hospital, told NAN that the bus was going to Ikeja from Igando when the mishap occurred.

Okafor said that he jumped out through the window when the bus caught fire.

He had a cut on the head which was being stitched when NAN arrived at the hospital. The nurse treating him did not allow NAN to talk further with him.

Commuters who could not afford the high price resorted to trekking even long distances.

A commuter who pleaded anonymity called for urgent repair of the bad portions of the Oke Afa-Isolo Road to save lives.

He said that traffic managers should have closed all entrances to the bridge since some fuel from the fallen tanker spilled on potholes.

LASTMA, Federal Road Safety Corps, firefighters and volunteers were working hard to decongest traffic as at the time of this report.