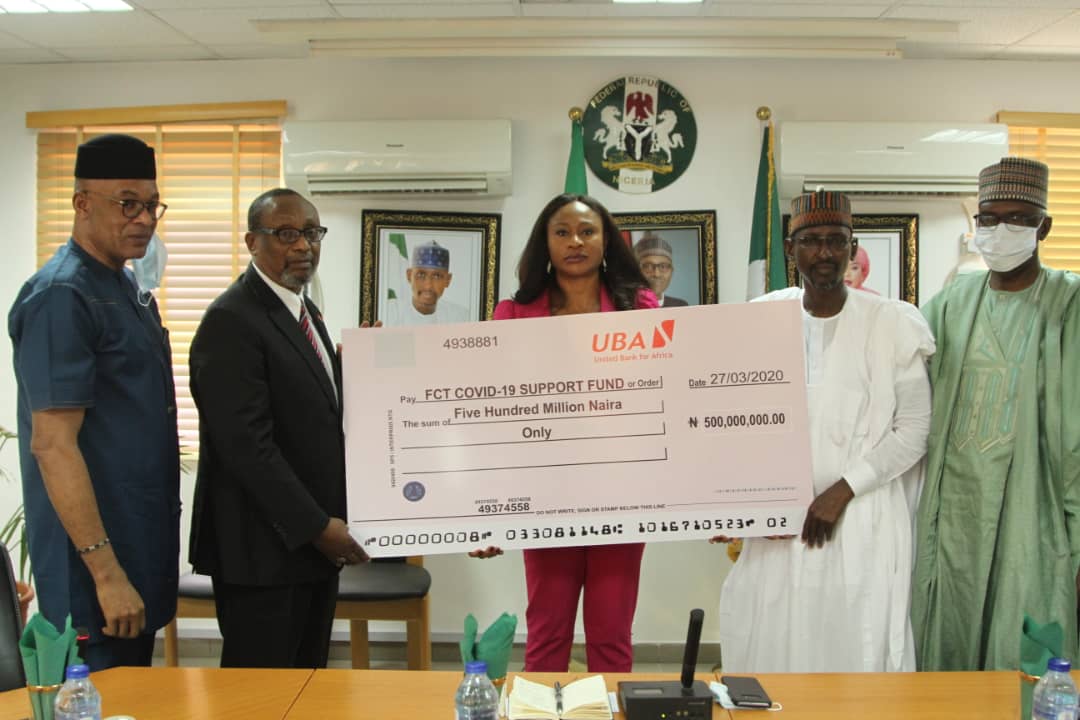 The Federal Capital Territory Administration (FCTA) today received a N500M donation from the United Bank for Africa (UBA) to fight the COVID 19 pandemic in Abuja.

Receiving the cheque of N500M from the Vice Chairman of UBA, Ambassador Joe Keshi, who led a delegation of the Bank on a solidarity visit to FCTA, the FCT Minister, Malam Muhammad Musa Bello said the donation was the first hefty sum received by the FCT Administration since the onset of COVID 19.

Malam Bello who commended UBA for such a generous donation, said the money would serve as a major boost in the efforts by the Administration to nip the spread of the virus in the bud in the FCT. He assured that FCTA was working hand in hand with the NCDC to ensure that the organization gets the necessary working tools.

He said plans were already in motion to grade the road leading to the NCDC testing office in Gaduwa for ease of access, adding that the donation will go a long way to ensure that the job is done as soon as possible.

The Minister who described the Chairman of UBA, Mr. Tony Elumelu as a great philanthropist, said he was not surprised that the Financial Institution was the first to make such a donation to the FCT to help fight the pandemic.

Earlier, the Vice Chairman, Ambassador Keshi said the donation was a part of the Bank’s Corporate Social Responsibility (CSR) and a show of support to FCTA in the face of the COVID 19 pandemic.

Keshi expressed concern over the likelihood of a spread in densely populated areas of the country and called on well-meaning Nigerians to join hands to fight the disease.

He said N200M of the sum is being set aside for the National Centre for Disease Control (NCDC), explaining that the donation was to strengthen the testing capacity of the Centres.