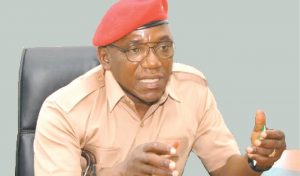 The Super Falcons eliminated the host nation Cote D’ivoire 5-4 after a penalty shootout, having played out a 1-1 draw in regulation time  at the Stade Robert Champroux.

Barrister Dalung said in a statement that their victory is a reinforcement of the Super Falcons’ dominance of women’s football in Africa.

“I congratulate the Super Falcons for lifting the WAFU Women’s Cup in Cote D’Ivoire. I commend them and their officials for their excellence, team spirit, outstanding display and unity of purpose. I urge you to continue in like manner as you approach the FIFA Women’s World Cup in France next month.  The task ahead is quite enormous but we are upbeat that you will make the country proud in France at the World Cup,” Dalung said.