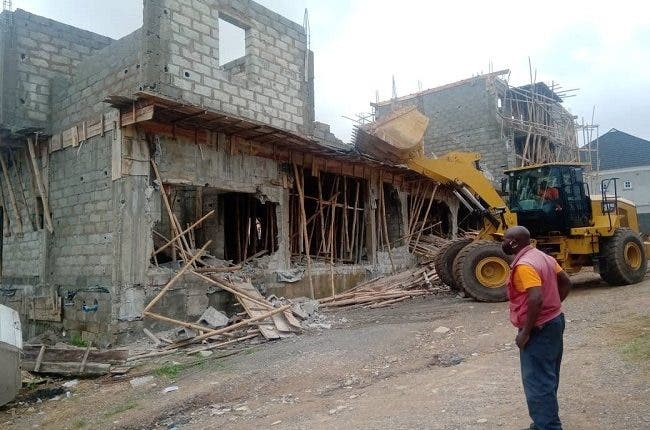 The Director of the Department, Malam Muktar Galadima, who led the demolition, told newsmen that the FCTA would not condone land racketeering and grabbing.

He said that the administration was determined to ensure correction of all infractions and abuses of the Abuja Master Plan.

“The FCTA has already made it clear that the actions and activities of land racketeers cannot and will never be condoned.

“That is why we are removing all those illegal developments.

“About 25 solid structures were removed and this is not limited to that estate (Destiny Estate) alone, it’s a continuous exercise and we will remove all illegal structures across the territory.

“So, what you see here is a continuation of the exercise in tackling the issue of land racketeers and land grabbers in Abuja,” he said.

Galadima advised the public to always ensure compliance and obey the rules and regulations guiding developments in the nation’s capital.

He said that Abuja was a planned city and people could not just wake up, cut a chunk of land for themselves.

Similarly, the director ordered the occupants of an illegal building materials market on N16 road corridor in Karsana District, near Gwarinpa district, to vacate within 14 days.

”The government is desirous to begin construction of the road. We went out to sensitize traders on ways to find a peaceful way to remove the market.

“Because of the magnanimity of this administration, we first sat with them, talk and gave them room to also make contributions regarding the intended exercise.

“We told them we will return in a week’s time, but they pleaded for more time. They asked for one month to take out their materials and valuables, but that one month is too long a time, so we agreed on two weeks,” he added.