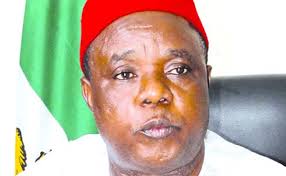 The Federal Government said it will set up a committee in the coming week to review the revenue sharing formula for Federal, States and Local Governments due to current economic realities.

The Chairman, Revenue Mobilisation Allocation and Fiscal Commission (RMAFC), Mr. Elias Mbam disclosed this to newsmen in Abuja on Tuesday, shortly after he received an Award of Excellence from the Nigeria Civil Service Union.

Also, 13 percent of oil and gas federally collected revenue is returned to the oil-producing states as derivation revenue to compensate for ecological disasters arising from oil production.

The formula was designed during former President Olusegun Obasanjo’s administration.

However, the RMAFC in 2013 saw the need to review the formula for balanced development of the country, embarking on a nationwide consultation and met with notable figures on the issue.

In December 2014, the commission came out with a proposed new revenue formula but for some reason, it never saw the light of day.

Five years on, the RMAFC chairman said the commission plans to constitute a standing committee by next week to review the revenue sharing formula.