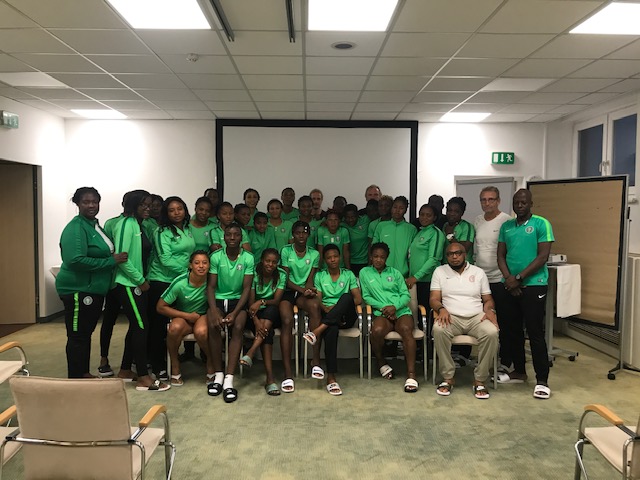 Three days away from the 2019 FIFA Women’s World Cup in Paris France, Nigeria coach Thomas Dennerby is fine-tuning his squad in preparation for their games against the host nation, France, Korea Republic and Norway in group A

Nigeria is one of the seven countries to have qualified and participated in all previous editions of the FIFA Women’s World Cup.

Super Falcons begin their campaign at this year world cup against Norway on June 8th after which they will face South Korea on June 12thand on the June 17th the Africa champions will clash with host country France at the Roazhon Park Rennes, in France.

Even if the host nation France retain the tag of favourites to top Group A, Nigeria must snatch the runners-up spot to at least raise hopes of beating their 1999 quarter-final finish. An opening win over rivals Norway is vital.

Regarded as outsiders on the world stage over the last two decades, Nigeria re-emerged as African champions last year, and won the 2ndeditions of WAFU tournament of recent reawakening their continental dominance. This achievement could get them fired up to reach the last four after been considered perennial underachievers in recent years.

Adjudged to be the 38th-best football playing team in the world by the recent quarterly ranking released earlier in March, Nigeria is the lowest-ranked nation in Group A. Their rivals, France, South Korea and Norway, are Fourth, Eleventh and Twelveth in the world respectively.

Even at this, Thomas Dennerby ladies remain the best Africa as playing in the final at the AWC secured them an automatic qualification spot for the World Cup.

In seven previous appearances, Nigeria fell six times out of the group stages, but managed just once to finish in the top eight, bowing out to Brazil at USA 1991 in a 5-4 penalty shoot-out.

Super Falcons seem strongly determined and more focused as a team seeking to upset the world, combining their experience both at youth and senior level.

Apart from the huge advantages in age and strength, most players in the final squad have featured at least in a World Cup or an international age-grade competition just like their coach; as such, they have no reason to fear their more-illustrious opponents.

Also, Defender Chidinma Okeke made the cut, as did midfielders Amarachi Okoronkwo and Evelyn Nwabuoku and home-based forward Alice Ogebe.

Nigeria will look to her deadliest strikers in Asisat Oshoala, Francisca Ordega, Desire Oparanozie and young Rasidat Ajibade as their potent weapons to lead the attack against opponents in France.

However, the Nigeria Football Federation revealed that it is keeping a good focus on the  FIFA Women’s World Cup as African champions, Super Falcons, arrived at the Avita Resort, Bad Tatzmannsdorf in Austria on Tuesday, for a two –week residential camping leading to their departure for the 8th FIFA Women’s World Cup finals in France, starting on 7th June.

Speaking with Aljazirah Nigeria Sports on the preparedness of the team ahead of the competition, the NFF General Secretary Dr Sanusi Mohammed said that the federation is working round the clock to ensure the super falcons have a successful outing in France.

The African giants will hope to retain their tags as underdogs and will explain, simultaneously, that there less-heralded striking talents-Ordega Oparanozie, Oshoala, Ajibade -can surprise their more illustrious opponents. They have accrued huge playing experience from several professional stints in Europe.

The 59-year-old led Sweden to a third-place finish at the 2011 Women’s World Cup and believes the African queens have a bright chance to excel in France.

According to him, we definitely need to work on our attacking play.

“It’s one thing to score four times against Slovakia and three times against Thailand, but when you go to a World Cup where we will play against Norway, Korea Republic and France, it will be a totally new challenge for the players.

“I’m not saying they don’t do that in Europe, but in Nigeria, they’re more extreme. It’s good in many ways, but also very heavy on their shoulders because they want to be so loyal.

“They need to feel free, that they can make mistakes. They will get a smile from the coach anyway. We have a really tough group, no doubt about it. I think we have a really good chance to have a good game against Norway and also against South Korea.

“And hopefully, if I can dream a little, three or four points when we come to the final match against France so that we can have that feeling of: ‘Wow, this is a once-in-a-lifetime game against the host nation.’ If I were still a player, it would be the game of my life.”

Also, the Super Falcons have played eight matches in 2019 as part of their preparations for the World Cup with four wins and four defeats, scoring 19 goals and conceding 12 times in the process.

Coach Dennerby equally refused to be disappointed in his side’s poor defensive showing as he feels pleased with the experience gained from the friendlies.

“First of all, I was very happy that we had this opportunity. Playing at a tournament like this is extremely important for a team like the Super Falcons.

“Invitation tournaments have indeed helped to know the team strength and weakness and we shall work on those areas before the competition.”

The biggest question is can the exploits of Oshoala, Oparadozie others ensure the Super Falcons enjoy a better outing in France?