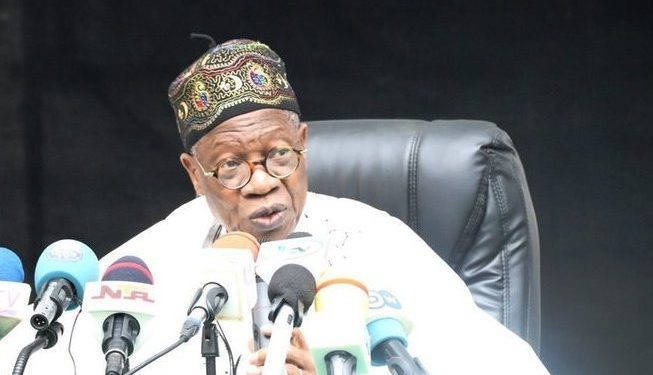 The Federal Government has revealed it has recovered looted funds in excess of N800 billion with over 1,400 convictions secured.

The Minister of Information and Culture, Alhaji Lai Mohammed, stated this on Tuesday at a press conference in Abuja.

According to him, as you are all aware, Nigerians have recently been inundated with allegations of monumental corruption in a number of government agencies, including the NDDC, NSITF and the anti-corruption agency, EFCC.

“Many, especially naysayers, have misinterpreted these developments as a sign that the Administration’s fight against corruption is waning. In fact, the main opposition PDP has latched on to the developments to call for the resignation of Mr. President, a call that is nothing but infantile!

“Let me state here and now that the fight against corruption, a cardinal programme of this Administration, is alive and well. President Muhammadu Buhari, the African Union’s Anti-Corruption  Champion, who also has an impeccable reputation globally, remains the driver of the fight and no one, not the least the PDP under whose watch Nigeria was looted dry, can taint his image or reverse the gains of the fight. Anyone who disagrees that the anti-corruption fight is alive and well is free to dare us.

“What the revelations of the past few weeks, especially the investigation of the nation’s anti-corruption Czar, have shown is that this Administration is not ready to sweep any allegation of corruption under the carpet; that there is no sacred cow in this fight, and that- unlike the PDP – we will not cover up for anyone, including the members of our party and government, who faces corruption allegations.

He added that “I am not prepared to go into the details of the various corruption allegations – whether at the NDDC, NSITF, EFCC or any other agency – because they are all still under investigation. However, I wish to state that the allegations of corruption in NDDC, for example, are not new. What is new is the speed and seriousness with which this. The administration has tackled, and is still tackling, the allegations. Had such attention been paid to the running of the NDDC by previous Administrations, the Commission would probably have avoided its present predicament. Is it not a sad irony, then, that those under whose watch the alleged freewheeling spending by the Commission started are now the ones accusing those who are cleaning up after them of corruption?

“As I said earlier, this Administration’s fight against corruption is as strong as ever, and we have the records to back up this claim. This Administration has recorded over 1,400 convictions, including high profile ones, and recovered funds in excess of 800 billion Naira, not to talk of forfeiture of ill-gotten properties. This is no mean feat.

“Remember, gentlemen, which the fight against corruption is not about loot recovery or convictions alone. We are also putting in place enduring institutional reforms that will deter acts of corruption. Here we are talking about the Treasury Single Account (TSA), the Whistleblower Policy, the expansion of the coverage of the Integrated Payroll Personnel and Information System as well as the Government Integrated Management Information System and the Open Government Partnership and Transparency Portal on Financial Transactions, among others.

“Let me also mention the ICPC’s Constituency and Executive Projects Tracking Group, aimed at tracking performance of publicly-funded projects, and the Commission’s escalation of the use of administrative sanctions in the public service by periodically submitting, for sanction, names of public servants who are being prosecuted. There is also the review of the personnel and capital fund expenditure of MDAs.

“Therefore, those who are celebrating the so-called waning of the Administration’s anti-corruption fight are engaging in wishful thinking, and are not looking at the full ramifications of the fight.

“Let me end this press conference by quoting what Mr. President said on the fight against corruption in his speech marking the 59t independence anniversary of the country: ”This Administration has fought against corruption by investigating and prosecuting those accused of embezzlement and the misuse of public resources. We have empowered teams of prosecutors, assembled detailed databases of evidence, traced the proceeds of crimes and accelerated the recovery of stolen funds….The policies that we are putting in place today are to ensure such criminal and unpatriotic acts do not go without consequences.”

He said the current government’s fight against corruption is as strong as ever, and that the government has records to back up the claims.

Mohammed added that the government also forfeited several properties suspected to have been acquired through corrupt means.