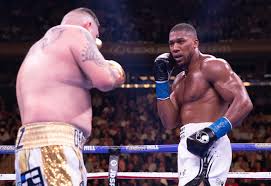 Anthony Joshua will earn a British fight purse record of £46m for his rematch with Andy Ruiz Jr According to the report.

The former unified heavyweight champion is aiming to regain the titles he lost to Ruiz Jr on Saturday night in  Saudi Arabia.

The decision to stage the rematch in Saudi Arabia was widely criticized, with the country consistently accused of human rights violations.

Ricky Hatton’s £20m fight purse against Floyd Mayweather in 2007 stands as the largest pay day for a British boxer, but Joshua will eclipse that figure.

While Joshua earns just under £50m for his appearance in Saudi Arabia, Ruiz Jr will receive just over £10m for the second fight.

Joshua’s previous best payday was the £18m he earned in his first showdown against Ruiz Jr at Madison Square Garden last June.