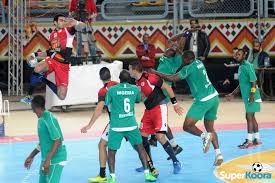 Nigeria will play in a challenging group at the 24th Men Senior Handball Africa Nations Cup in Tunisia.

The draw for the biggest handball competition in the continent which held in Tunis on October 19th saw the senior men national handball team in group B alongside Angola, Gabon and Libya.

Technical director of the Handball Federation of Nigeria (HFN) Coach Ferdinand Emeana is not losing sleep over the group pairing as he feel that Nigeria will do better with the best of preparation.

Coach Emeana, who hopes the team will go on a training tour before the championship, further urged the ministry of sports to support the teams with funds to do well at the nations cup so as to pick a ticket for the Olympics and world championship.

“For me I wouldn’t say whether the group is cheap or tough. Ours is to give the country a good representation and that means picking a world cup ticket and Olympics ticket.

It’s not going to be easy but the players are determined and the board is determined. What I request is the support of the govt”

We need to prepare well to get a good result, I expect that the team will go on playing tour before the championship.

Looking at the performance of the team at the last All Africa Games, if well motivated, we’ll stun Africa”. He concluded.

Nigeria had gotten to the quarter final of the All Africa games in Morocco and will hope to do better in the Africa Nations Cup which is expected to hold in Tunis in the coming months.