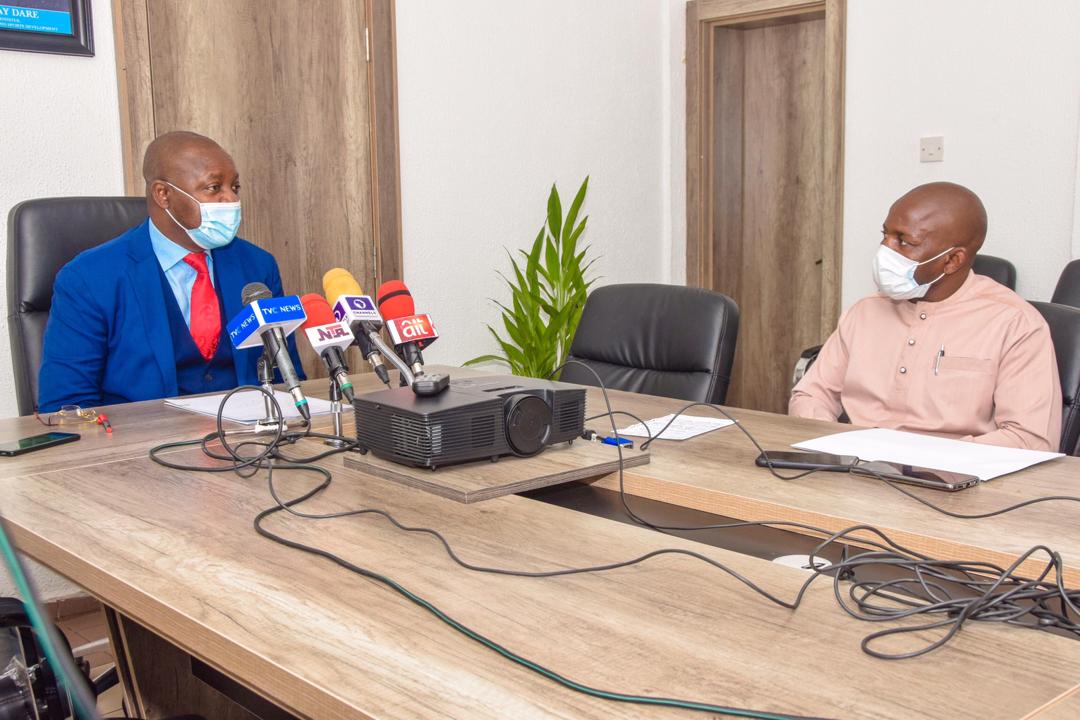 The Minister of Youth and Sports Development Mr. Sunday Dare while hosting the Bayelsa state Commissioner for Youth and Sports  Dr. Daniel Igali on Tuesday assured Nigerians of Olympic medal haul in Wrestling.

According to the Minister “If we’re sure 0f a Sport that would fetch us medals at the Olympics it is wrestling, considering the fact that the federation had done so well.

“The Wrestling Federation under the leadership of Dr. Daniel Igali Vision, dream, and focus are in line with our plans and we are sure that the likes of Blessing Oborodudu and Odunayo  Adekuroye would win medals at the Olympics.

“It gladdened our heart when you were appointed  Commissioner for Youth and Sports Development because we believe that once we have seasoned athletes like you in this position, we are sure that you will get on the same page with the policy of the Federal Government on youth and sports Development.

“For us, that is a plus and we believe that in the next four years as Commissioner, you will work closely with the Ministry of Youth and Sports in line with our Vision of grassroots Development,  Partnership with the private sector and state governments. I also want to thank you for speaking to the Adopt Initiative. We were already on an accelerated pace to get as many athletes as possible adopted before COVID-19 slowed us down.

“ Some of those that promised to adopt was also affected because their company was shut down and there was a general downturn. We have picked up again and I recall clearly that you are also a product of adopting initiative in Canada where you actually hit the peak of your performance. We hope that this adopt initiative is something that has a sustainable model to support our athletes other than the Olympics”.

“We celebrate you as an Olympian, we salute your effort to ensure that you share that podium with other Nigeria wrestlers which are why one of our greatest hope of medals at the Olympics is Wrestling among the eleven sports that we have chosen. We can almost take it to the bank that we would get a medal from Wrestling due to your leadership, discipline, and professionalism. We hope we can sustain the tempo till next year so that our Athletes will have podium performance.

“Let me also say that we have 32 sporting Federations supervised by the Ministry. Without mincing words, I think the Wrestling Federation remains one of our best federations. I can see the connection between having a leadership that is purposeful, that is collegial, democratic, and not unilateral, respect the code of governance and the constitution set by the board. You can see the connection with what happens with the quality of the athletes and I hold the Wrestling federation as one that we want to have a constructive relationship with the Ministry. We also want federations where the leadership pays attention to the welfare and the development of its members particularly the Athletes.

The Minister congratulated Igali on his appointment as Commissioner for Youth and Sports Development in Bayelsa State.

In his own remark, Igali thanked the Minister for his giant strides in the last one year since assuming Office

Igali solicited the Minister’s support to vie into the office of the World wrestling body, partnership with the Bayelsa State Government and plans to organize the maiden edition of the Bayelsa State  Sports Festival.