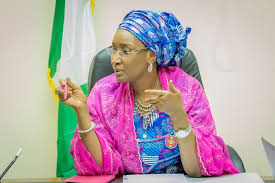 The Ministry of Humanitarian Affairs, Disaster Management, and Social Development Sadiya Umar Farouq has approved the payment of stipends to the exiting N-Power beneficiaries under one of its National Social Investment Programmes.

Minister during the week in Abuja gave approval for the payment of the outstanding stipends for the exited N-Power Batches A and B beneficiaries.

According to the statement signed by the Senior Assistant Media to the minister, Nneka Ikem Anibeze stated that: “The approval for payments for up to the month of June 2020 for the two (2) Batches has already been forwarded to the office of the Accountant General of the Federation (AGF) for final checks and payments. The only outstanding approval waiting to be forwarded to Accountant-General’s Office is for the payment of July Stipends for batch B beneficiaries.

“About 14000 beneficiaries that were omitted by the AGF’s Office during the payment from March to June 2020 could be among those rejected by the GIPMIS payment platform due to discrepancies identified with their accounts as conveyed to the ministry by the AGF’s office. According to the report from the AGF’s office, any beneficiary receiving payment from other government payment platforms will be rejected by the Government Integrated Financial Management System (GIPMIS). Hence their payment will be withheld.

“The FMHADMSD has requested details of those affected and the reason for their rejection from AGF is Office and has promised to communicate that to the affected beneficiaries. However, if the rejection was done in error, those affected should be rest assured that they will be paid all that is due to them as soon as the error is rectified by the AGF’s office.”

The statement added that: “the non-dis-engagement of Batch A beneficiaries after 24 months was done out of exigencies of the time. Therefore, exiting Batches, A & B after 40 and 24 months respectively is in line with the conditions stipulated at the time of their enrolment. This is corroborated by the fact that when the N-Power program was transferred to the ministry late last year, there was no plan for either automatic employment into public service or private sector or for the transition to entrepreneurship put in place for them before the takeover by the Ministry.

“Despite this, the exited beneficiaries are advised to exercise more patience and await the result of the efforts being made by the Honorable Minister who is currently engaging various MDAs including the CBN and the Federal Ministry of Agriculture and Rural Development to ensure that the eligible exited beneficiaries are transited to government programs or even employment where available.

“In this regard, “we have directed Focal Persons of NSIPs in all the states to submit an updated list and details of the exited N-Power beneficiaries that are interested in participating in the transition plans of the ministry.”

Continuing, Minister added that the incoming Batch C beneficiaries will clearly know the details of their terms of enrollment and exit at the time of entry into the programme to avoid what happened in the case of Batches A & B.

“Adequate plan will be made well ahead of their time of exiting the program to avoid what happened presently.

“The candidates seeking enrollment into batch C will be scrutinized and selected on merit.

“The ministry will follow a transparent process for selecting the qualified beneficiaries out of the 5,000,000 (five million) who applied”.