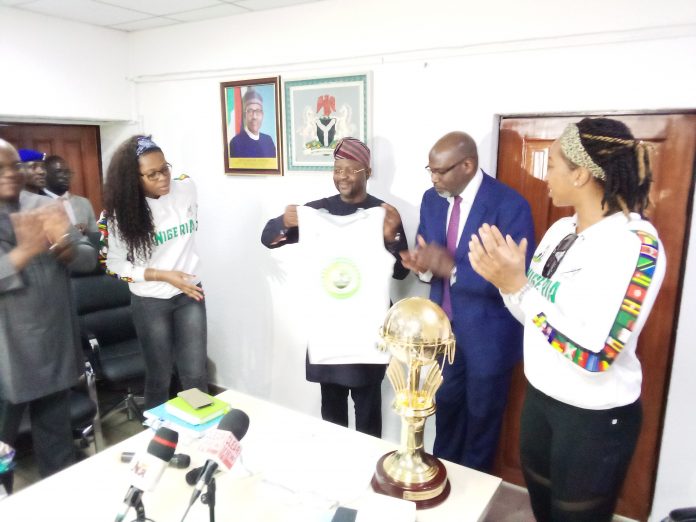 NBBF Welcomes Minister of Sports To Office With Afrobasket Trophy

The newly appointed Minister of Youth and Sports, Mr.  Sunday Dare was on Friday was welcomed to the office with 2019 Afrobasket trophy courtesy of Nigeria’s D’Tigress of the Nigeria Basketball Federation, NBBF. 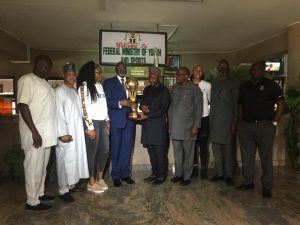 Just last week the D’Tigress break barriers and set new records in Basketball by winning FIBA Afrobasket trophy back to back after a fierce battle with the host nation even in the presence of over 20,000 home crowd in faraway Senegal.

While receiving the giant trophy, Minister of youth and sports Mr. Dare applauds the team for the deserve victory saying they indeed exhibit the character of the tiger by defeating the host nation.

According to him, the government of President Muhammadu Buhari will continue to give the D’Tigress the support it needs both financially and otherwise.

“President followed the games and very soon, once we have a confirmed date, D’Tigress will be in Abuja and I will lead them to present the cup to President Muhammadu Buhari.

He, however, challenged the NBBF board and the D’Tigress to increase their hard work adding that the result of hard work is more hard work.

Speaking earlier, the elated NBBF President, Engr Musa Kida described the occasion as a significant one which marks the beginning of many things to come for the new minister while in office.

“We are glad as a federation that we are the first to welcome the new minister to the office with a trophy which we won in Senegal. This is not just another event for us as NBBF; it is a landmark achievement as we have been presented with such a golden opportunity to interface personally with the Minister.”

Kida said at a crucial time like this with many international events to prosecute, it was imperative for the NBBF board to visit the minister and have firsthand information about what is happening within the federation.

“Our male team is in China and we all know how they got there. The women are the current African Champions. So, we needed to see the Minister and tell him about our plight. We are quite hopeful about the meeting we had with the Minister that things can only get better.”