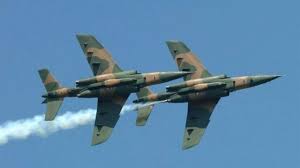 In continuation of the sustained offensive against criminal elements in the North East of the Country, the Air Task Force of Operation LAFIYA DOLE has eliminated some Islamic State of West Africa Province (ISWAP) terrorists and destroyed compounds housing them at Kaza along with the Gulumba Gana – Kumshe axis of Borno State.

In a statement issued by the Coordinator, Defence Media Operations, Defence Headquarters Major-General John Enenche on Wednesday in Abuja revealed that the airstrike was executed on September 1st, 2020 following credible Human Intelligence reports as well as confirmatory Intelligence, Surveillance and Reconnaissance (ISR) missions indicating a resurgence of terrorists’ activities in the settlement.

“The identified locations within the settlement were therefore attacked by fighter jets and helicopter gunships dispatched by the Air Task Force, resulting in the destruction of the structures and the neutralization of some of the ISWAP fighters.