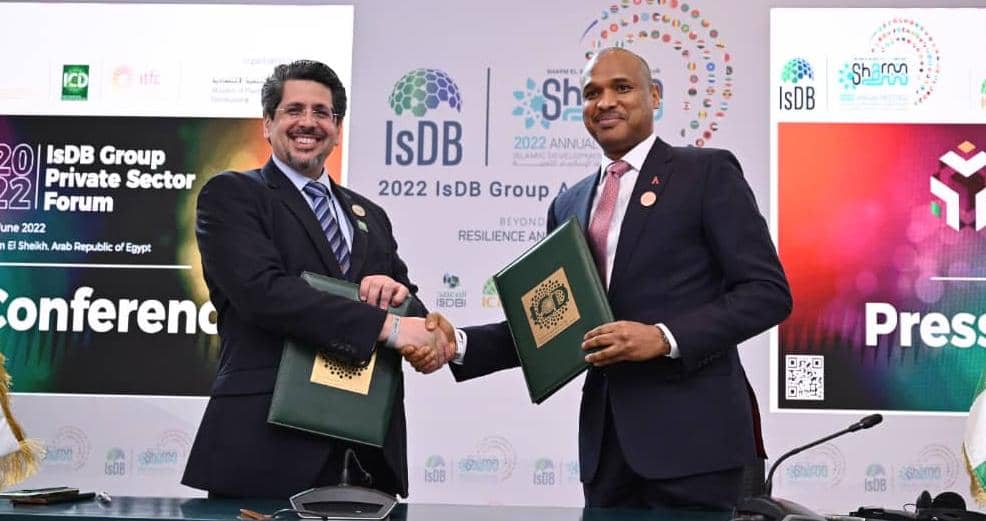 Joel Ajayi
TAJBank Limited, Nigeria’s leading non-interest bank, has signed a Memorandum of Understanding(MoU) with the Islamic Corporation for the Development of the Private Sector (ICD), a member of theIslamic Development Bank (IsDB) Group, aimed at attracting funding for major infrastructure projects inNigeria.

The MOU signing between TAJBank and the ICD is to express a convergence of will between both entities and build a relationship between the Nigerian lender and the international organization toexplore avenues of financing key capital projects in the Country.

According to the bank’s board, the Sukuk will be offered in tranches of N10 billion each as soon as regulatory approvals are secured.

Speaking on the MOU after the signing, TAJBank’s Managing Director/CEO, Mr. Hamid Joda, enthused: “We are deeply delighted to have crossed another milestone with the signing of this MOU and especially with the Islamic Corporation for the Development of the Private Sector (ICD), it only further buttresses our intention of stimulating investments in critical sectors of the economy leading to national development.

“As we all know, Nigeria has a huge infrastructure gap that requires funding through long-term fundslike that of the ICD”, Joda added.

In his remarks on the deal, the bank’s Executive Director, Mr. Sherif Idi, also expressed his joy over thedevelopment, stressing that the signing of the MoU further demonstrates that “TAJBank is sustaining its giant strides, and this is seen in this partnership as we hope to do more in securing investments that will further bring about creation of jobs and production for better national advancement.”

TAJBank, a leading non-interest bank in the country, commenced operations about two years ago and has accomplished several milestones, including expanding its branch network to 22 within its franchisearea during the period.

The non-interest banking services provider had a few days ago unveiled plans to launch a private sector targeted N100 billion Sukuk programme under a Mudaraba structure that will afford it the opportunity to grow its capital base and by so doing, position it on a strong pedestal to finance large and long-term projects in Nigeria.

The ICD is a multilateral development financial institution under the IsDB saddled with the responsibilityof supporting the development of its member-countries through the provision of finance for private sector projects, promoting competition and entrepreneurship and encouraging cross border investments, amongst other key responsibilities

…Eyes National Bank Licence
Joel Ajayi
Smarting from the impressive financial and other operational performance indices recorded since it debuted as a non-interest bank in Nigeria two years ago, the Board and Management of TAJBank Limited on Wednesday highlighted indices to ensure its continuous and sustainable growth in the years ahead.

The Managing Director/CEO of the bank, Mr. Hamid Joda, in his report at the bank’s 2022 Annual General Meeting (AGM) held in Abuja, attributed the performances of the non-interest lender over the past two years to innovativeness in key areas of customer-centric service delivery powered by world-class technologies and solutions, human resource capacity building and shareholders and customers’ growing confidence.

Specifically, the seasoned banker listed the key objectives considered crucial to transforming TAJBank into an industry leader in the years ahead as including, securing a license to make TAJBank a national bank by the second quarter of 2022; and promoting financial inclusion by leveraging various channels and touch points, especially through the bank’s electronic platforms.

In addition, Joda told the shareholders that one of their objectives was to make TAJBank to “be recognized as the market leader in the non-interest industry in Nigeria” and that another major strategy is to “expand its branch network across state capitals/major commercial centers in Nigeria to offer non-interest banking product and services to the understand markets.”

He also spoke on plans to grow the bank’s agency network to 100,000 agents by 2025 thereby reducing the financial exclusion rate; and to transform TAJBank into a leading digital bank in the country before the end of this year.

He expantiated: “Our success in 2021 demonstrates that we not only kept our commitment to our stakeholders, but we are growing in a sustainable manner so that we can continue to enhance value to society while also generating the revenue our shareholders will appreciate.
“We are constantly improving our operations so that we can respond to our clients’ ever-changing needs in their daily lives more efficiently and effectively. We are also pushing ourselves further beyond our comfort zones to provide a viable financial platform for all our stakeholders”, Joda added.

Earlier in his statement, the bank’s Chairman, Alhaji Tanko Gwamma, reported that TAJBank attracted and retained more customers, and recorded exponential growth in its risk asset base, while it is committed to achieving the required regulatory metrics, as well as pursuing strong growth in its balance sheet items, amongst other positive indices.

He enthused: “I am delighted to inform you that the future of the Bank is outstandingly bright and beautiful. We are confident to state that our exceptional service delivery, robust technological deployment, and responsive operational system yielded the excellent performance we have recorded so far.”