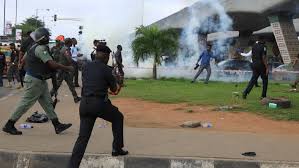 Policemen have fired tear gas to disperse the #RevolutionNow protesters who have converged on the National Stadium, Lagos, as activists decried the security agents’ attempt to break up a democratic protest by force.

Witnesses said policemen and soldiers drafted to the scene of the protest fired gunshots and tear gas at hundreds of protesters who had converged on the National Stadium complex for the commencement of the well-publicized protest march.

The protesters had arrived at the stadium as early as 7:00 am Monday morning for the protest to start, but a combined team of policemen who were later joined by soldiers resisted the protesters from entering the stadium.