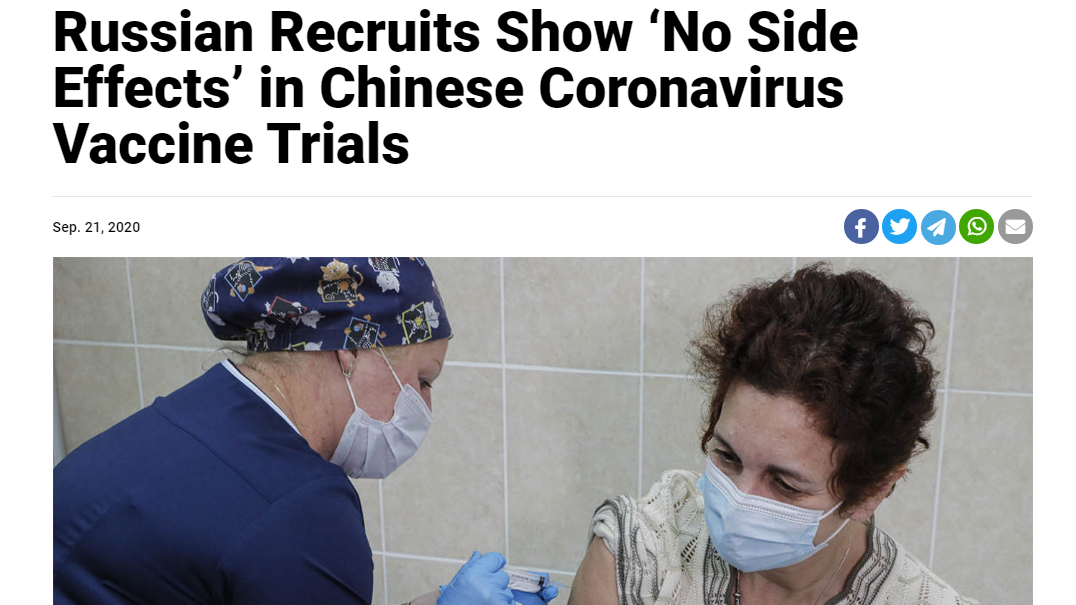 People who got a Chinese COVID-19 vaccine candidate in a large-scale clinical trial in Moscow in early September have reported no side effects, local media the Moscow Times reported Monday.

The vaccine, called Ad5-nCoV, was developed by Chinese company CanSino Biologics in alliance with the Chinese military’s research arm.

Russia approved the Phase III trial of the vaccine last month, and Russian pharmaceutical company Petrovax worked with CanSino to conduct the trial. Petrovax said it has received more than 3,000 applications to get the vaccine so far.

“At the moment, the volunteers are doing well. None of them have shown any side effects,” Petrovax said in a press release.

The study participants who got vaccinated are expected to develop antibodies and cellular immune response to COVID-19, the company said.

They will be put under direct supervision for nearly a month, with four interim face-to-face examinations, and will undergo a control examination after six months, according to Petrovax.

The preliminary results are expected to come out in November, it said.

CanSino’s Ad5-nCoV is one of the most promising COVID-19 candidates currently in the final stage of clinical trials worldwide. The Phases I and II trails, which involved more than 700 volunteers, were conducted in China this spring, all showing good results.

Phase III trial of the vaccine has also launched in Saudi Arabia, involving about 5,000 subjects, according to CanSino.

Russia has already registered one of its self-developed COVID-19 vaccines – Sputnik V – last month just after Phases I and II trails, although its long-term safety and effectiveness remained to be tested in Phase III trials involving 40,000 participants.

(Cover: Screenshot of the report from website of The Moscow Times.)