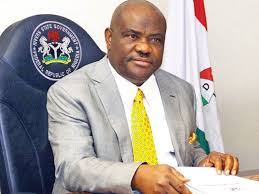 The youths drawn from the nine states of the oil rich region asked the governor to reopen the commission’s office within the period of the ultimatum or face stiff and sustainable protests and unrests from them.

They spoke under the aegis of the Consolidated Youths of Niger Delta (CYN)led by its National Coordinator, Comrade Frank Naday.

Naday, who addressed newsmen after their emergency meeting in Uyo, the Akwa Ibom state capital, explained that the office was sealed about a week ago over non remittances of revenues by   the government of Rivers state

“From our findings and the information made available to us, it is clear that the Commission has paid the backlogs of revenues it owes the Rivers State Government.

“We want to ask Rivers State Government to as a matter of urgency, unseal the Commission’s office complex to enable workers gain access to their various offices.

The youths, who expressed worry that their efforts at addressing their plights through the Federal Government agency were being thwarted by the government of Rivers state, appealed to President Muhammadu Buhari, to intervene as the prevailing peace in the region maybe truncated. .

“In a couple of months that the new leaders assumed office, they have been able to pay contractors and return them back to sites, they have addressed the problem of water hyacinths too.

“It is also on record that the students studying abroad in various Universities in United Kingdom, have received their stipends and their schools have also been taken care of by the Commission.

“The rate of construction in Niger Delta region is really on the increase as almost all the states in the region are experiencing massive road construction”, he stressed.

Besides, Naday disclosed that “the Niger Delta Development Commission led by Prof. Nelson Brambaifa, has electrified a lot of communities in the Niger Delta region and has also given them water project to enable them have good water”.

Speaking further, Naday said: “We condemn the actions of Rivers state government in its entirety. We urge the state Government to leave NDDC alone because shutting the office down, is doing more harm than good

“Imagine where thousands of youth that are employed by the various contractors are shut out because of the shutdown of the Commission. It will lead them to various criminal activities in order to make earns meet”,

He, therefore, impressed it on President Buhari to work towards the confirmation of Prof. Brambraifa, as the substantive MD of the NDDC, noting that “he is the first among his predecessors who is not suing the agency as a spring board to aspire to any elective political office”