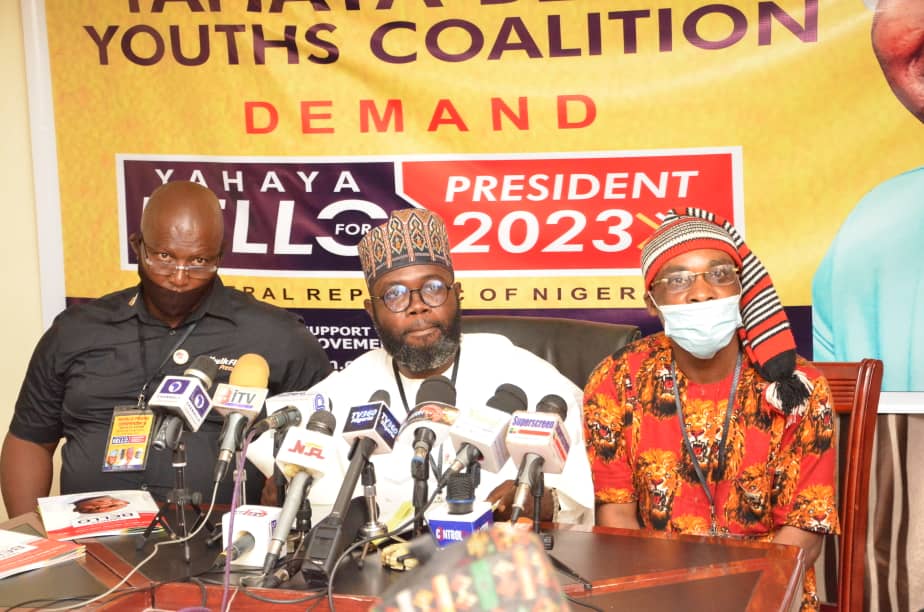 The Yahaya Bello Youths Coalition YBYC has intensified the campaign, to ensure the aspiration of Incumbent Kogi of state Gov. Yahaya Bello becomes the next Nigerian President, and possible successor to President Buhari, come 2023.

A coalition of Youth in a Press Conference Held on March 19, 2021, at the IMPR Office Building in Abuja revealed that Nigerians, both at home and abroad, politicians, and other top party stakeholders are tightening their belts and strategizing to partake in the political process.

While speaking the National Coordinator (YBYC) Comrade Shuaibu Muhammed Olowo urges Nigerians to believe in the pedigree, antecedents, and credentials of Gov Bello that they believe if achieve will sustain the lasting legacies of transformational leadership, already bequeathed by Mr. President.

The group tagged is; “Resetting Nigeria on the Path of Greatness Come 2023: YAHAYA BELLO to the Salvation”

According to him, my fellow, charismatic and indefatigable Comrades driving the noble and progressive agenda of Yahaya Bello Youths Coalition.

“It may be just two years before the tenure of President Muhammadu Buhari and some State Governors elapse. But the race to Aso Rock and the 36 Government Houses, have since begun. The conversation on the 2023 general election continues to gather momentum across regional and political belts.

“Nigerians, both at home and abroad, politicians and other top party stakeholders are tightening their belts and strategizing to partake in the political process. Interestingly, there are names of some political juggernauts, both in the ruling party and opposition parties, who are been touted as the next Nigerian President, and possible successor to President Buhari, come 2023.

“But many have bothered less about their leadership capacity, pedigree, antecedents, and credentials. Instead, they consider and have attached a significant premium to the ethnic affiliation, religion, and geo-political zones of the potential aspirants.

“As a progress-seeking and not-for-profit political pressure group, “Yahaya Bello Youths Coalition” is seriously concerned about the future of Nigeria, post-Buhari administration. We are apprehensive as to who shall emerge from the sea of potential presidential contestants as President, and sustain the lasting legacies of transformational leadership, already bequeathed by Mr. President.

“We embarked on conducting a critical and impartial assessment of the profiles of some eminent politicians already been touted as Nigeria’s President-in-waiting, come 2023. Surprisingly, after the painstaking exercise, we unanimously found in Governor Yahaya Bello of Kogi State, the requisite capacity, vibrant youthfulness, and astute competence required of the next Nigerian President.”

Speaking further, YBYC  added: “Like France, Australia, Canada and several other developing nations of the world, Nigeria, now, and more than any other time, needs to experiment with a youthful and visionary President come 2023. If President Buhari, who is over 70 could record many sterling achievements, one can only wonder when an accomplished youth, courageous leader and hardworking Governor in the person of Governor Yahaya Bello, is in the saddle as Nigeria’s leader.

“In just about five years as Kogi Governor, Gov. Bello has redefined servant-leadership and true governance. Little wonder, the entire Kogi, Niger, and Ebonyi, State House of Assembly Lawmakers, have since endorsed and thrown their weight behind this self-sacrificing demand, any time he finally decides to hear our call.

“At the risk of exaggerating, Gov. Yahaya Bello is definitely going to be a Nigerian leader that will not take action or do something solely because he wants to play to the gallery. While some of his colleague-Governors were economical with facts, especially with regards to the presence of COVID-19 in their States, GYB refused to play politics with people’s life. And the outcome is there for all to see.

“Many people who knew Kogi State and its terrains, can attest to the transformation which has taken place since Yahaya Bello came on board in 2016. For a State infamously regarded as a hub for kidnapping and other violent skirmishes, nobody would have believed that Gov. Yahaya Bello will, through his magic wand, permanently address insecurity and crimes in the Confluence State, in just four years, before his re-election for a second term in 2019.

“As a youth-friendly and gender-sensitive governor, Governor Bello is one of the few, if not the only one having his entire State Executive Councils, majorly comprising of youths and women.

He has promoted women inclusiveness in politics to the extent that he ensured that all the Local Government Areas’ Vice Chairmen in Kogi State are women, who contested under his party, APC, in last December 2020 council elections.

“At the moment, the education, health and agricultural sectors, among others in Kogi State, are in a league of their own thanks to the purposeful leadership of Governor Yahaya Bello. GYB, it must be said, is presently building one of the best specialist hospitals in the country, in Okene town.To further add, the Amalgamated Union of Foodstuffs and Cattle Dealers of Nigeria, recently called off its strike, few days after embarking on the industrial action. This, followed the timely and calculative intervention of Governor Yahaya Bello.

“The union and the Northern Consensus Movement had met at the instance of the governor at the Kogi state Governor’s Lodge in Abuja where the governor impressed it on them to call off the strike. The Union led by the president, Dr Mohammed Tahir, as well as Chairmen of the Union across the 36 states of the Federation and the FCT and critical stakeholders, earlier met with the Governor behind closed doors.

“Addressing journalists at the end of the interface, Dr Tahir commended Governor Bello for wading into the crisis and ensuring that it was resolved. According to him, Governor Yahaya Bello has demonstrated leadership which both parties greatly appreciated. Indeed, with GYB’s tact diplomacy and uncanny mediation capacity, we strongly believe, like many others, that Nigeria averted what could have triggered food crisis of an alarming magnitude, in the country.

“For these above-mentioned unrivalled feats, and many other germane reasons, we are hereby calling on Governor Yahaya Bello to quickly accept the genuine calls of many spirited bodies, patriotic individuals and teeming Nigerian youths, to contest for the 2023 presidential election.

“Like us, many see him as the messiah that will proffer solutions to the myriad of woes bedeviling the country. We are also calling on the youths, most especially, to champion the cause of not only having a youthful president, but a Nigerian leader that will share in their pains, and make assiduous effort to better their lots. 2023 is the time to demand for a generational change in power. Again, we are demanding for nothing, but Yahaya Bello for President, Federal Republic of Nigeria, come 2023. God bless us all!.”