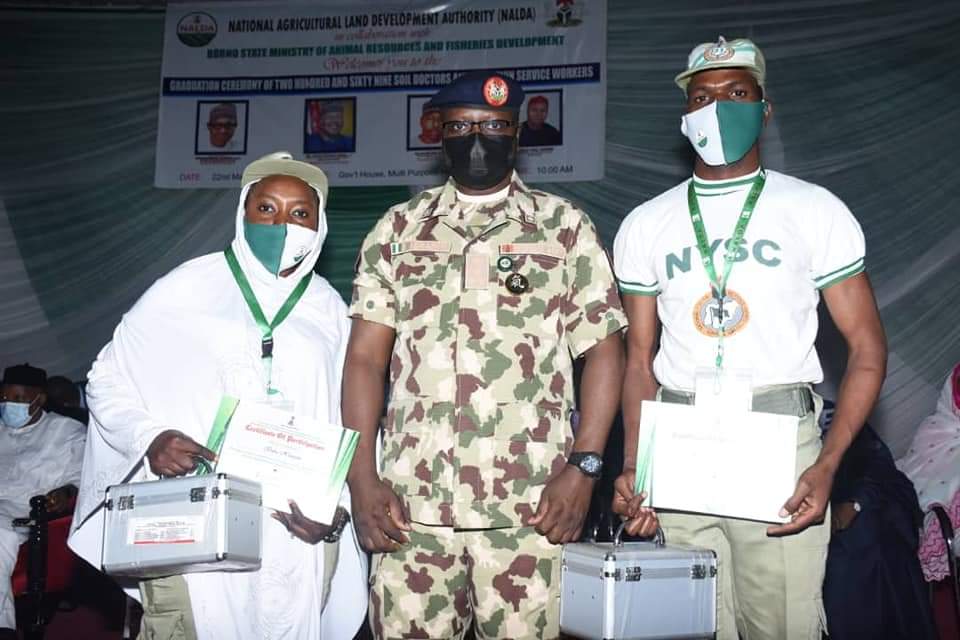 Sixty-eight Corps members are among the two hundred and sixty-nine pioneer graduates of a mass training of Soil Doctors and Extension Services Workers in the country in what is seen as another giant leap forward in the Federal Government’s efforts to boost agricultural production.

The training was conducted by the National Agricultural Land Development Authority (NALDA) in collaboration with the Borno  State Government as part of the thousands planned for the entire country.

In a statement issued by the Scheme Director of Press and Public Relations Adenike Adeyemi (Mrs) revealed that,  inclusion of the Corps members is part of the outcomes of an ongoing partnership between NYSC and NALDA aimed at ensuring success of the effort of the Scheme to reinvigorate its agricultural programme.

Speaking at the graduation ceremony which took place at the Government House, Maiduguri, the Executive Secretary of NALDA, Prince Paul Ikonne, said President Muhammadu Buhari was passionate about the quality of food production, and had mandated his agency to make sure the country’s soil yielded maximum output and enable farmers to earn higher returns on investment.

He added that the trainees were also equipped with soil sample collection and analysis kits, which they would use for the job.

The Executive Secretary praised the Borno State Government and the NYSC Management for speedily keying into the initiative.

Speaking on the occasion, the Senate President, Dr. Ahmed Lawan congratulated all stakeholders in the training, and expressed confidence that it would provide additional impetus to the agricultural sector.

He said the event was a further demonstration of the commitment of the Buhari Administration to ensuring food security, adding that the Administration had invested resources in agriculture than any previous Government in the country.

Lawan assured that the National Assembly would make legislations to support the sector, including ones to guarantee favourable market for farmers.

He commended the Borno State Government and the National Youth Service Corps for cooperating with NALDA, adding that it was an indication of increased regard for inter-agency collaboration and inter-governmental cooperation.

In his address, the Borno State Governor Professor Babagana Zulum stressed that knowledge of the soil for the purpose of cultivation of any type crops by farmers was too important to be ignored.

Zulum said the training of the Soil Doctors and Extension Services Workers would go a long way in ensuring the preservation of soil as well as ensure optimum utilisation of arable land in the state and the entire country.

He, therefore, thanked NALDA for availing the state of the training to promote agricultural productivity, adding that the State Government would in turn support the Agency for the success of its programmes.

The Governor, who said agriculture was at the heart of the state’s development strategies,  added that his Administration would continue to welcome opportunities for improvement of the sector.

In a goodwill message, the NYSC Director-General Brigadier General Shuaibu Ibrahim described the training of the Soil Doctors and Extension Services Workers as laudable, noting that it came at a time the Federal Government was pursuing it’s policy on diversification of the economy through harnessing of the nation’s potentials in agriculture and other non-oil sectors.

“No doubt, the activities of the young men and women, who are concluding their training today, will go a long way in enhancing agricultural productivity and profitability in Nigeria.

“I have no doubt in my mind that this initiative will also make agriculture and allied activities more attractive to youths, in particular, and the rest of the population,” he added.

Ibrahim urged the trained youths to judiciously apply the knowledge acquired for the benefit of the country.

He informed the gathering that the NYSC was rejigging its Agricultural programme to compliment the effort of the Federal Government towards ensuring that Nigeria attains self-sufficiency in food production.

The Director-General said the Scheme’s mega farms are currently operational in the FCT as well as Bauchi, Kebbi and Oyo States, adding that NYSC had also keyed into federal government’s rice policy programmes with the cultivation of rice in the FCT and Kebbi farms.

He disclosed that the rice production would be expanded with the cultivation of the farm in Ezillo, Ebonyi State during the 2021 farming season.

He spoke of the Scheme’s collaboration with NALDA as well as the International Institute of Tropical Agriculture; Agricultural and Rural Management Training Institute; National Centre for Agricultural Mechanization; and the National Cereals Research Institute, which are geared towards training of Corps members and Staff on modern farming techniques and deployment of equipment.

A major highlight of the occasion was the presentation of Certificates and soil sample collection and analysis kits to the graduates.

JOIN THE CAMPAIGN TO SAVE PDP FROM TOTAL EXTINCTION (PART 1)