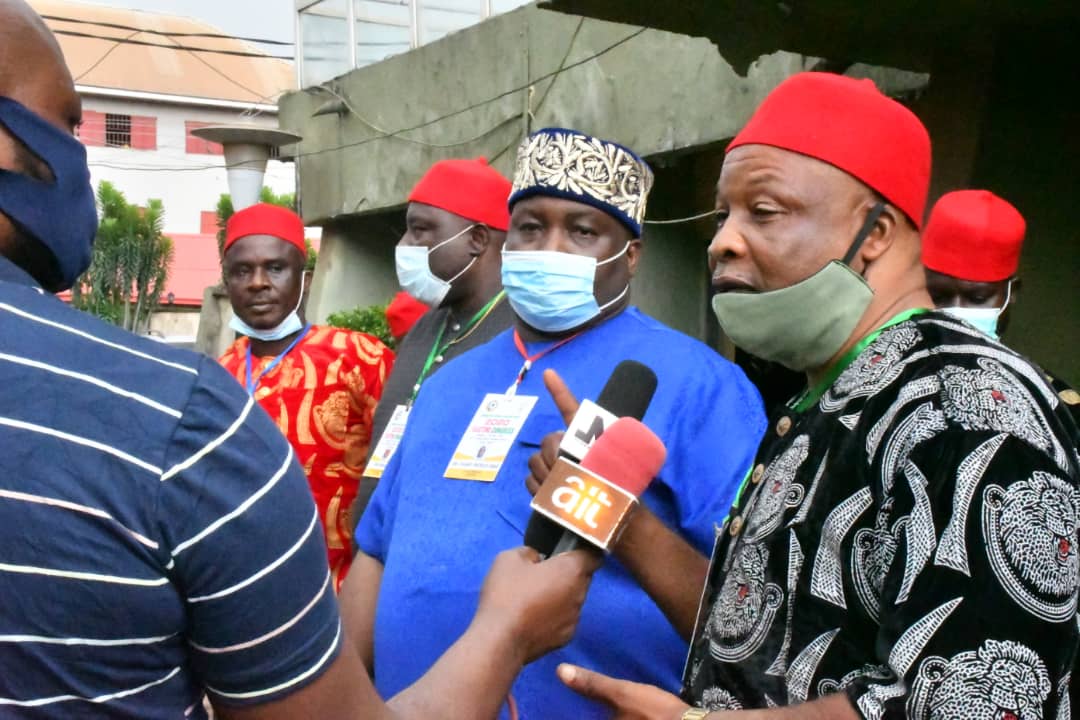 The World football governing body FIFA is totally against any form of government interference in association football and may come down hard on the Nigeria football federation NFF, if Senator Patrick Ifeanyi Ubah submits an official complain before the FIFA ethics committee explaining the role the NFF played by scuttling a properly conducted state FA Election.

Anambra state governor Willie Obiano is of the ‘All Progressive Grand Alliance’ APGA, while Senator Dr. Patrick Ifeanyi Ubah his political rival, is of the ‘Young Progressive party’ YPP.

Ubah remains the strongest opposition to APGA in the run-in to the fast approaching gubernatorial elections in the state and that has put the incumbent in a state of confusion right from the very beginning.

He is also aware that Ubah’s strongest weapon is football, a tool he has used to mobilize millions of Anambra youths to his side. He is therefore determined to break that cord by stopping him from making a triumphant return as Anambra state FA chairman, a position he has been occupying for the last 4 years.

Unfortunately for him, all those he pushed forward to compete against Senator Ubah in the state FA election, lacked the will or prerequisite credentials to do so as they were either disqualified or advised to step down when the ovation became loudest.

In his desperation, he finally found a willing ally in NFF chairman of chairmen Ibrahim Gusau, who went to Anambra state with the intention to supervise the election only to fall for the prank of the state government by fooling Nigerians that football association Elections cannot hold in the state because of the Covid-19 pandemic.

The NFF on their part failed woefully to advice him that the state FA Elections was to be decided by just 26 delegates in a state where over 50,000 persons attend churches every Sunday and more than 10,000 persons are seen daily at the popular markets.

In complying with the directives of the state government and the NFF, the electoral committee for the election put a stop to the process and advised the state FA to respect the NFF release which quoted governor Obiano’s reasons as part of their reason to stop the elective congress.

The state FA congress later met and did the needful by first amending the statutes and approving virtual election as the only way forward. This decision was taken on July 27.

Based on the congress approval, the electoral committee wrote the NFF, to inform them of this latest development and their intention to conduct a virtual election. This they eventual did on Sunday August 2, only for the NFF to declare the process illegal and to go a step further by constituting a caretaker committee to run fooball affairs in the state for the next 3months.

That committee according to the NFF will be inaugurated on Wednesday August 5 in Awka, Anambra state

Coincidentally, the chairman of this new committee that was inaugurated by the NFF, Mr Emmanuel Okeke, contested and lost with just two votes in the virtual elections that was conducted on August 2.

Now Where does FIFA comes in?

It is clear from all that has been said here, that this is purely a political battle and that the state governor has influenced the NFF by whatever means, to stop Senator Ubah from continuing as Anambra FA chairman. What that means therefore is that there is a clear case of government interference which FIFA frowns at.

Article 17 of the FIFA Regulations[2], provides that:

“Each member shall manage its affairs independently and with no influence from third parties.”
Countries that have fallen foul of the non-interference rule of FIFA have either been banned, or suspended for various lengths – some for a few months, while others, years – usually dependent on how long it takes the erring country to rectify its wrong.

From the examples cited above, it is obvious that in situations where there is a clash between FIFA Rules and intervention by the government, FIFA would prevail, owing to the fact that it is the governing body of footballing activities in the world and all Member Associations are subject to its laws and regulations.

What senator Ifeanyi Ubah needs to do as a matter of urgency is to do a letter to CAF and FIFA, briefing them of these developments and asking them to come to his aid.

There is every likelihood that in the coming days, FIFA will respond as the NFF has no right whatsoever to interfere in a state football election. What they have done is totally out of place and in complete breach of the FIFA statutes and must be condemned by all.