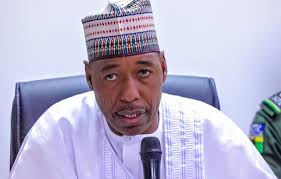 He said the ugly new trend is a direct fallout of unemployment and the continued stay of able-bodied people in Internally Displaced Persons (IDPs) camps.

The governor said this while receiving a committee of members of the House Of Representatives at his office in Maiduguri, Borno State capital.

“The only solution we have now is to ensure the safe return of our people to their homes in a dignified manner. If nothing is done believe me sincerely we shall face a very serious challenge even more than what we are facing now.

“This is because right now the insurgents are recruiting many of our children into the sect because of the increasing unemployment rate,” he said.

He disclosed that there are more than 700,000 Internally Displaced Persons in Monguno and another 400,000 in Gamboru Ngala without access to their farmlands.

Zulum, therefore, suggested that the solution to this problem is to shift from short term Humanitarian support to longer-term development and sustainable solution with the safe return of internally displaced persons to their communities.

Meanwhile, the House committee chaired by Khadija Bukar, are in Maiduguri for an oversight function at the Northeast Development Commission.

Earlier the House committee had sought the government’s cooperation with the NEDC to achieve the common goal of improving sustainable development in the region.