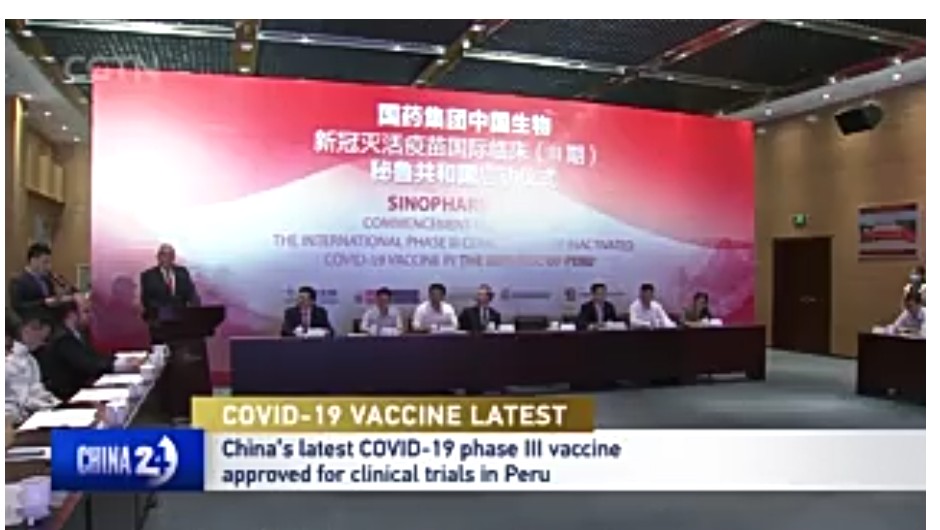 A ceremony has taken place in Beijing Thursday to launch phase three clinical trials for a COVID-19 vaccine in Peru. Peru’s national health authorities have approved the trials, the latest in China’s efforts to strengthen international cooperation in pandemic control. China’s Biotec Group is carrying out the research with experts from some of Peru’s leading universities. For more, CGTN’s Liu Yang speaks to the chairman of China’s National Pharmaceutical Group.

LIU YANG Beijing “In June, Sinopharm’s CNBG launched international phase three clinical trials in the UAE. Why Peru this time, and what’s so significant about this partnership?”

LIU JINGZHEN Chairman, China National Pharmaceutical Group “Epidemic prevention and control in China has made strategic achievements. Under these circumstances, it’s impossible to do phase three clinical trials in China. We launched the promotion of international clinical trials in April. Take me for example. I had more than two hundred meetings with health ministers, science and technology ministers, interior ministers, foreign ministers, and ambassadors to China from more than forty countries. Brazil, Argentina and Peru are among the top few in the world in terms of coronavirus outbreaks. So we’re making key breakthroughs in South America, and we’re currently negotiating with Brazil to enhance cooperation. In Peru, we’re working with the University of Cayetano Heredia and the National University of San Marcos, specifically to cooperate comprehensively on the clinical phase three trials. They’re two of the top universities in Peru, and their experts have been very professional across the board.”

LIU YANG Beijing “What’s the current progress on the trials in the UAE?”

LIU JINGZHEN Chairman, China National Pharmaceutical Group “With the strong support of UAE government departments and our partner G 42 Group, we’re fully promoting cooperation. The effects have been very good. We’re the world’s most successful and fastest project in terms of entering phase three clinical trials. The second round of injections has now begun in the UAE.”

LIU YANG Beijing “Are there any plans in the pipeline to cooperate with other countries on the third phase of clinical trials for a vaccine?”

LIU JINGZHEN Chairman, China National Pharmaceutical Group “We’ve spoken to more than forty countries and regions including Brazil, the Philippines and many other countries, but the progress has been relatively slow. However, we are now in phase three in terms of the experiments so far, and the layout of phase three is completely sufficient. Our next step is to focus on vaccine procurement and cooperative supply.”

LIU YANG Beijing “After the clinical phase three trials, what needs to be done before the vaccine can enter the market, both in China and the rest of the world?”

LIU JINGZHEN Chairman, China National Pharmaceutical Group “The phase three clinical trials haven’t been completed, and the vaccine has not officially been approved and marketed as of now. But as a commodity, in the case of an emergency, foreign governments can purchase vaccines from us. There’s no obstacle to such purchases. We’ll supply the vaccine to whoever buys it. This is in compliance with the law.”

LIU YANG Beijing “If the vaccine is expected to be on the market at the end of December, when do you plan to start mass production?”

LIU JINGZHEN Chairman, China National Pharmaceutical Group “Vaccines are to be used for prevention by healthy people. It must be accessible to the general public. According to President Xi Jinping’s speech at the World Health Assembly, China’s vaccines will be used as global public goods after research and development is successful. We have two research and production facilities in Beijing and Wuhan, which can ensure the supply of 200-million vaccines a year. According to our clinical experiments, taking two injections can achieve the best effect. The best interval between the two injections is 28-days. This can ensure overall effectiveness, approved by experimental data.”