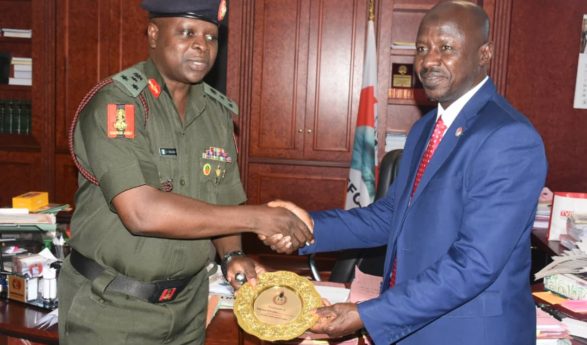 The Economic and Financial Crimes Commission has pledged its support for the National Youth Service Corps in combating fraudulent mobilization of unqualified graduates for national service.

It also commended Corps Members for educating Nigerians on the dangers of corruption through the anti-corruption Community Development Service groups.

In a statement issued by the Scheme Director, Press and Public Relations Adenike Adeyemi (Mrs) on Tuesday in Abuja .

EFCC Acting Chairman, Mr Ibrahim Magu stated this when he received NYSC Director-General, Brigadier General Shuaibu Ibrahim who paid him a courtesy call in his office at EFCC Headquarters, Abuja.

Magu, in his response to NYSC Director General’s request to checkmate the activities of unpatriotic Nigerians, who brings shame to the nation by their unsatisfiable desire to make money at all cost, including sale of academic qualifications to unqualified graduates also condemned such sinister motives.

Speaking earlier, the NYSC boss decried the increasing rate of corruption in all spheres of life in the country, adding that, under his leasdership, staff and Corps Members will pursue the fight to get rid of the ugly monster with greater zeal.

He stressed that the war against corruption requires the support of all and sundry by joining forces with all anti-graft agencies of government to eradicate the deadly menace.

Brigadier General Ibrahim appealed to Mr Ibrahim Magu to support NYSC in its quest to closely monitor the activities of unscrupulous higher institutions, that present unqualified graduates for mobilization for national service.

The Director-General promised to add vigour to the Scheme’s result-driven partnership with the Economic and Financial Crimes Commission in combating corruption.

“Mr. Chairman, it is very unfortunate that some institutions of higher learning, particularly in Cotonou, Benin Republic present to us people who didn’t go to the four walls of the university as graduates for mobilization”.

“Currently, we are investigating some of such so-called graduates, many of whom cannot write or spell any word in English”, he lamented.