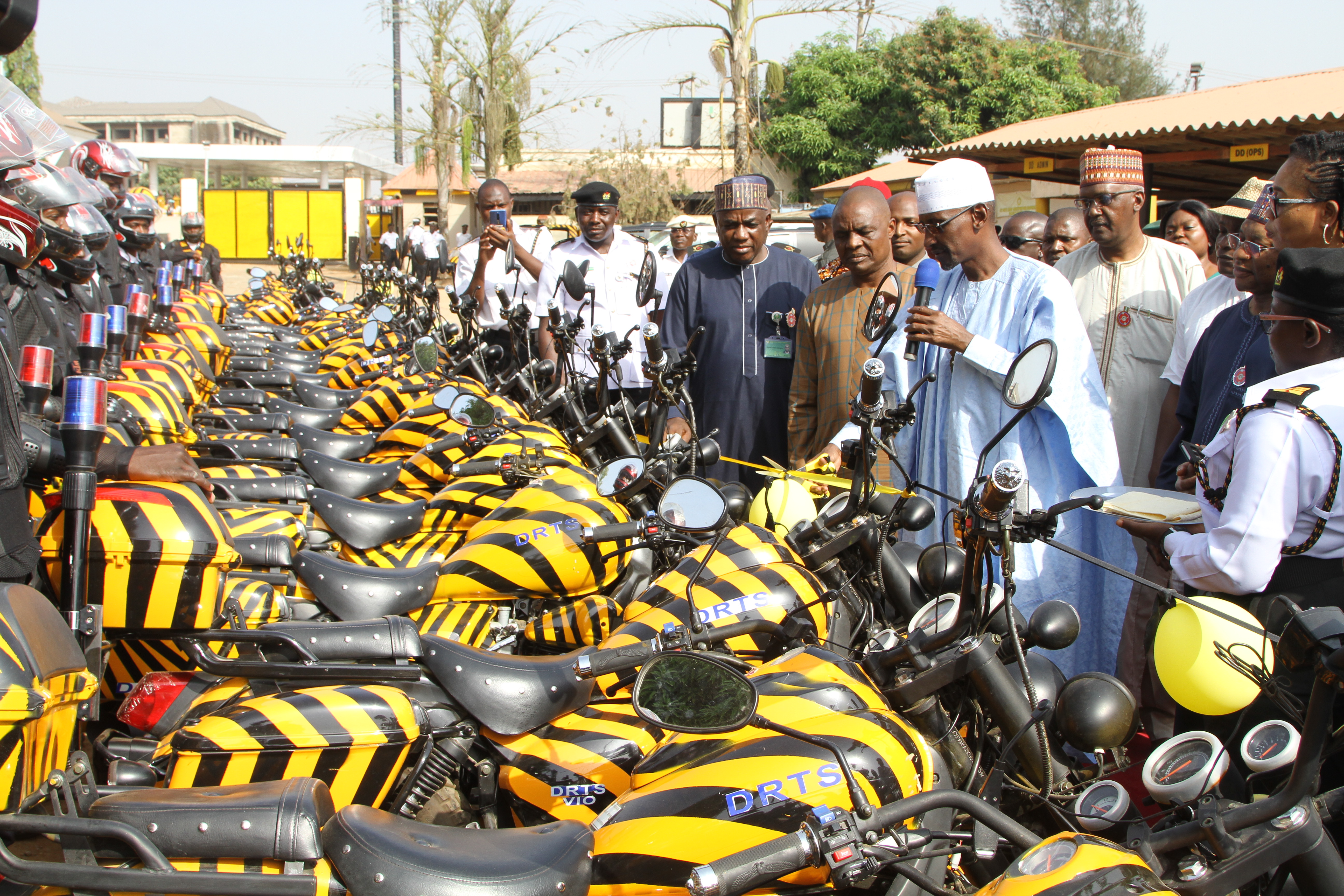 As part of efforts to enhance the implementation of the safe functional and efficient transport policy of the FCT Administration, the Honourable Minister of the FCT, Malam Muhammad Musa Bello has commissioned a fleet of 22 operational and utility vehicle as well as 60 high speed and high capacity motorcycles for the use of the Directorate of Road Traffic Services.

According to the Minister, the vehicles which are made up of Ford Ranger and Nissan Pickup trucks, Peugeot Salon cars as well as Innoson manufactured motorcycles were purchased in order to strengthen the capacity of the DRTS and reposition it for better service delivery.

The Minister reminded officers and men of the DRTS that with the provision of these equipment, the FCT Administration as well as residents of the FCT look forward to a safer and better managed traffic enforcement strategy.

Malam Bello in his address also reminded the officers of the DRTS that all enforcement of road traffic rules and regulations must be done within the ambits of the law. In his words, “All actions must be done knowing that we are here to serve the people. So, as you relate with even traffic violators, you have to deal with them courteously and show respect for dignity and human rights”.

Malam Bello also decried the situation where some road users still broke traffic rules within the city with impunity either by operating vehicles that are not road worthy or lacking the skills to properly handle their vehicles.

He lamented that statistics indicate that the FCT had the second highest number of road accidents in the country caused basically by road users who engage in over speeding over speeding because of the good road network in the city. He therefore admonished road users to always obey all traffic rules.

The Minister also charged the top echelon of the DRTS to make sure that the organization fulfilled its mandate 100% and reciprocate the gesture of the FCTA in purchasing the equipment and recruiting the needed manpower as required by the DRTS. He urged them to therefore maintain an efficient and corruption free organization as they will be held individually and collectively responsible for errors.

Malam Bello also disclosed that discussions had reached very advanced stages with private sector entrepreneurs for the provision of vehicles to fill the gaps created by the restriction of the operations of Tricycles and to replace the aged fleet of high capacity vehicles currently plying FCT roads.

In a welcome address, the Acting Transportation Secretary, Mrs. Alice Odey-Achu, commended the FCT Minister for the operational and utility vehicles and motorcycles, adding that the gesture would go a long way in addressing issues of safety for road users.

Represented by the Director, Traffic Management in the Secretariat, Engineer Etim Abak, the Acting Secretary stressed the importance of a safe, functional and efficient transport system for the sustainability of the nation’s capital city.

Mrs. Achu added that with the commissioning of the vehicles and motorcycles, a wider area of traffic conflicts and incidence will be covered within a short time.

Speaking at the event, the Director, DTRS, Mr. Bodinga Wadata, commended the Honourable Minister for the providing the vehicles and motorcycles, adding that the all hands will be on deck to honour the confidence reposed in the Directorate.

Also present at the commissioning were the FCT Permanent Secretary, Sir Chinyeaka Ohaa, the Chief of staff to the Honourable Minister, Mallam Bashir Mai Borno, the Executive Secretary FCDA, Engr. Umar Gambo Jibrin and other senior members of the Administration.