The attention of the Honourable Minister of Youth and Sports Development, Mr. Sunday Dare has been drawn to a fake post circulating via WhatsApp and other social media asking people to submit applications to him for employment into the Federal Polytechnic Ayede  Ayelade, Ogbomoso Oyo State.

In a statement Signed by the Media Office of the Honourable Minister of Youth and Sports Development on Thursday in Abuja read that: “For the avoidance of doubt, Federal Polytechnic Ayede, being an academic institution, falls under the supervision and oversight of the Federal Ministry of Education, so application for employment into the institution cannot then be directed to Mr. Dare, who is the Minister of Youth and Sports Development.

“Members of the public are therefore advised to disregard the fake message asking them to submit CVs and application letters “to Sunday Dare’s office @ Alata plastic store opposite Anglican Grammar school” as this is a calculated attempt at mischief.

“The Minister of Youth and Sports Development is not responsible for recruitment into the Federal Polytechnic Ayede  Ayelade, Ogbomoso Oyo State.”

NAUS Call For Removal Of VC Federal University Of Oye-Ekiti 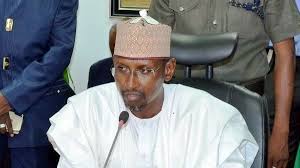 The FCT Minister, Malam Muhammad Musa Bello has chaired a meeting between the FCT Administration and the leadership of the FCT Wing of the Nigeria Union of Teachers that have embarked on a 5 day warning strike to press home demands for enhanced security in schools and payment of arrears of promotion benefits for teachers.

The meeting which was held in the office of the Minister was attended by the senior management officers of the FCTA and heads of some security agencies in the FCT.

The NUT leadership was briefed by heads of security agencies in the FCT made up of the FCT Commissioner of Police Mr Babaji Sunday, State Director of the DSS, Mr Ado Muazu and the State Commandant of the NSCDC, Dr Peter Maigari. They said measures were being taken to improve the security situation in schools.

On the strike action embarked upon by the NUT for the payment of arrears of promotion benefits for teachers for the years of 2016-2018, the Minister informed the union members that the efforts will be made to pay all the  promotion benefit arrears of the teachers before the end of the year, following the Permanent Secretary’s submission that all arrears for 2016 had already been paid and those for 2017 were scheduled for payment between November and December of 2021.

Speaking at the end of the meeting, the NUT Chairman, Comrade Stephen Knabayi said that the Union appreciated the efforts of the security agencies and assurances from the FCT Minister that all efforts will be made to protect the lives and properties of teachers and students within the FCT.

He also expressed the appreciation of the union to the Minister for the pronouncement on the payment of promotion arrears of 2017 and 2018 before the end of the year.

Speaking on the return of teachers to the classroom, the NUT chairman said “from this meeting and from all the resolutions we will go back without waste of time”

He also appealed to the FCT Minister to intervene in the payment of arrears of LEA teachers under the administration of the Area Councils.

In a similar vein, the Permanent Secretary, Mr Olusade Adesola said “it was agreed that for us in the FCT, the allowances of our teachers will be paid for 2017, since 2016 had already been paid and that consideration should also be given to prioritizing payment for those in the teaching profession of 2018 before the end of the year.