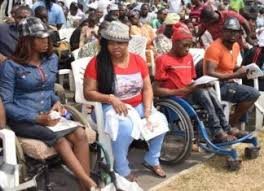 Leaders of different groups of Persons with Disabilities (PWDs) have alerted President Muhammadu Buhari that government institutions are defrauding and diverting funds meant for their development and wellbeing.

The alarm was raised by participants during a special town hall meeting against corruption, organized by Progressive Impact Organization for Community Development, PRIMORG, with the support of the MacArthur Foundation on Thursday in Abuja.

The well-attended meeting was held on the heels of a report by the International Center for Investigative Reporting (ICIR) that indicted the Women Affairs and Social Development Ministry for spending N275 million on non-existing rehabilitation institutes meant for PWDs.

The Executive Director of Centre for Citizens with Disabilities (CCD), David Anyaele raised the alarm that government institutions in the country have persistently diverted scarce funds allocated for the development and wellbeing of PWDs, stressing that corruption in Nigeria has become a systemic problem.

Anyaele said that it was worrisome that ministries, departments, and agencies of the government failed to heed to the directives of President Muhammadu Buhari on the welfare of PWDs. According to him, despite Buhari asking MDAs during his June 12, 2020 broadcast, to take appropriate measures to ensure PWDs are included in their programs, activities, and employment, nothing has changed.

On the impact of corruption on PWDs, he said: “The PWDs are begging on the street, they are not going to school, it is state-induced, they are using PWDs to retirement funds in the public sector.

“In all the states, there is monetary provision. If you go to all the ministries of women affairs there is provision for PWDs but by the end of the day, no money goes to anybody. No PWDs go to the Craft Center for the Blind, and Rehabilitation,” He lamented.

Anyaele, however, was not optimistic that the recently established National Commission for Persons with Disabilities will curb corruption to a measurable height.

Similarly, the Coordinator, Violence Against Person with Disabilities (VAPP), Ene Ede revealed that the establishment of the commission will not make much difference because it lacks independence.

Her words: “I want you to remember that the commission is also under a ministry and you cannot divorce the commission. In a situation where we are unable to scrutinize our leaders, holding them accountable will be difficult.”

She added: “corruption circle is systemic, which is sustained by elites, civil service, and the politicians. Civil servants give orientation to politicians.”

Ede who expressed her dissatisfaction that PWDs are defrauded by government institutions warned that the extent of corruption has reached the level of impunity urging President Buhari to lead by example and address accountability and transparency in the public sector.

According to Akinwale: “Uptill now, there has been no response from the ministries and personalities despite being indicted.”

He, however, said it was expected that anti-graft agencies, National Assembly, and the Presidency would have taken action against officials at the Women Affairs Ministry indicted in the report while assuring that the situation will not deter ICIR from publishing corruption reports in the future.

The participants commended PRIMORG for giving voice to the PWDs and scaling up the fight against corruption.